The Weather Here Gets a "Participation" Trophy 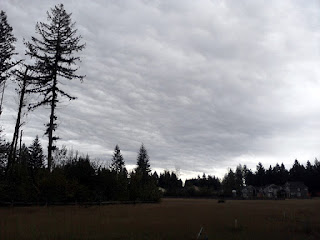 Okay, I'm probably being ungrateful.  The temperature here in Puyallup stays pretty steadily in the comfortable range. We only get a couple of decent snowstorms in the winter. Their idea of a heat wave is a blistering 79 degrees.  It hit 85 last summer and the natives were passing out on the streets. All in all, so long as Wal-Mart doesn't run out of anti-depressants (which happens sometimes), the weather is pretty mild.

Warm Pacific currents pump warm tropical air up through the western half of the state keeping the temperatures even. Haven't heard of them having many hurricanes or typhoon or whatever they call them  rolling in off the Pacific. Just clouds mostly. They have a special name for when the sun comes out because they see it so infrequently up here. Along the coast at Forks and LaPush, vampires can safely come out and run down to the Dairy Queen to hang out with their friends in the middle of the day. The overcast is that reliable. And that's pretty much my complaint.

I grew up in North Central Texas where we have real weather. When it's hot, it's in the hundreds for a month or so at a time. When it's cold, we're covered in ice and the electricity is knocked out for days.  I've seen the temperature drop 20 degrees in 10 minutes. I've worn Bermuda shorts one day and long underwear and a parka the next. During the summer, we spend at least one or two evenings a month sitting in the bathtub with a mattress over our heads listening to the weather guy track funnel clouds passing through the neighborhood. We have actual lightning - I don't think I've heard thunder since I got here. They have 49 varieties of drizzle.

I suppose my problem is that there's no weather related excitement up here. I think I'm bored weather-wise. A few minutes ago we had what passes for a hailstorm up here. The hail reached the size of BBs or bicycle wheel bearings and lasted for a full 45 seconds. Some folk, obvious visitors to the state, even opened umbrellas. The native Washingtonians never noticed. Me, I had my nose pressed against the window hoping for something at least the size of a decent golf-ball.


The weather up here reminds me of the kid in school who always wins the "participation" trophy.  It's like when a storm system passed through in December. The weather guys got all excited and had this marathon weather alert going on TV describing 25 mile an hour wind gusts knocking down dead limbs and pup tents. Back home we don't even pull the car under the carport for less than a force 3 tornado.

I kept expecting one of the weather guys to clap his hands and say, "Way to go, Mr. Weather. Good try!"

Of course, we can always drive up into the mountains and take a risk of being buried in an avalanche. That might at least get the old adrenaline going.

And there's always the volcano.....and the odd earthquake...........oh, and tsunamis. Other than that, it's pretty boring hear weather-wise.

A Fish Out of Alcohol

I Miss Him Already!

Still With The Miracles....

Americans ARE Passionate About Sports - We Just Express It Differently

Free-Lancin' - Who Knew It Could Pay?

What's With All the Zombies?

Only You Can Save a Homeless Fruitcake This Christmas

I Just Love My Homeowner's Association

Oh, Good! Now I Have Added A New Word to My Vocabulary

On the Subject of Daisies

Banjos on the Sea of Glass

OM45GE replied to topic 'THE IS TO WORD GAME' 8 hrs

One of a Kinds

twayneking has made 7 recent additions to Banjo Hangout

I grew up in the small Seventh-day Adventist college town of Keene, Texas where I graduated in 1976 with a degree in English-Communications. I married a Scots-Irish-Indian woman from Monroe, Louisiana and raised three children and some cats and dogs, birds and fish. Iâve taught school, taught swimming, canoeing and sailing, knot tying, camping and astronomy for kids. Iâve water skied on canoe paddles, assorted bits of lumber and my elbows. I have a couple of canoes and a catamaran, 3 guitars, two banjos, a dulcimer, a mandolin, a fiddle, 2 recorders, a penny whistle, fife, a bag of harmonicas, a bodhrain, pair of bones and a jaw harp or two â all of which I play badly. Iâve helped start up 6 nonprofit organizations in 25 years and raised millions of dollars none of which ever managed to stick to my bank account. Iâve won awards for documentary screen-writing, published poetry and short stories and a book on how to organize a charity golf tournament. I was appointed to a two year term on the Public Transportation Advisory Committee for the Great State of Texas by the Governor and I work as an advocate for seniors, people with disabilities and low income families. Iâm a Reagan conservative, which puzzles my fellow advocates, who think I should spontaneously combust from the sheer incongruity. On the other hand, Iâve taught them to speak Republican which has improved their rate of success with the state legislature. I am currently raising funds to expand Tiger Creek Wildlife Refuge here in East Texas. My advocacy work includes childrenâs issues, expanding public transportation, creating barrier free housing and promoting community wide accessibility standards that allow transportation challenged Texans to fully participate in their communities. I have three grandchildren, a son and daughter-in-law, my beautiful daughter and her new husband and we live on beautiful Lake Palestine near Tyler, Texas. My middle son, an amazing young man, passed away more than a year ago while finishing his senior year at UT Tyler. He was going to be a teacher. Since I wrote this, we moved away from the lake, lost almost everything and moved to Puyallup, Washington to live with my wife's sister and brother-in-law. In the midst of a recession and massive unemployment, it seemed to be the thing to do. We've cut our expenses drastically and I'm able to work on finishing up the books I have been working on.