Rednecks in Space - The Next Milestone in Commercial Spaceflight

Commercial spaceflight marked a new first this week when the Dragon X capsule docked with the International Space Station and unloaded a half ton of groceries and stuff.  It cost less to launch than a similar NASA or Russian designed space hauler, is recoverable and can be made into a crew carrier to replace the shuttle in just another year or so.

There is even a project going with Space X and Bigelow Aerospace to launch an inflatable space hotel in low Earth Orbit.  How cool is that? Meanwhile Burt Rutan's Scaled Composites and Sir Richard Branson's Virgin Galactic are experimenting with piggy-back launch vehicles and both airstrip and tail first landings. California's XCOR has cut Branson's per passenger ticket price by half already as competition pushes the development of commercial spaceflight forward at breath-taking pace. And despite the nay-sayers, there appears to be plenty of room for everybody in the market.

I figure after, the after the first manned commercial orbital mission, the next milestone will be when we see this.... 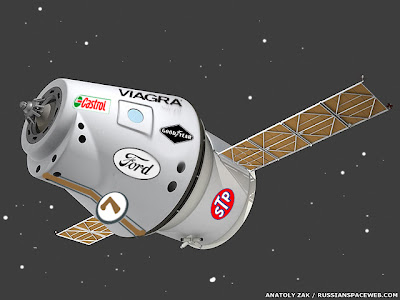 Not sure whether it'll be Jimmie Johnson or Dale Earnhardt Jr. at the controls, but I'm a Ford guy, so it'll depend on who Ford sponsors as to who I root for.