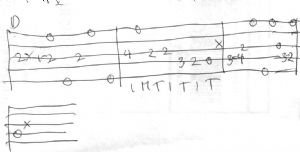 Somebody wanted to know what Ron did in this part of the song, so I tabbed it for them, and forgot to indicate what the tab was related to (or who played it). Sorry about the initial oversight.

4 comments on “2 measures of Ron Stewart”

"Schwimmerisms!" As Ru use to say.

It is actually a transcription of a Ron Stewart lick which he used in "Sunny Side of the Mountain". Somebody had asked about what Ron played during those measures so I tabbed it for them (from a version of the tune posted on YouTube) and forgot to put what the tab was for.

Whenever I slide on the 3rd from the first fret to second and add a few single stings and some blues..I think of your playing..Stewart must have gotten it from you!

Thanks for the support Jeff, but I don't know if Ron heard me play enough to be any influence on him.