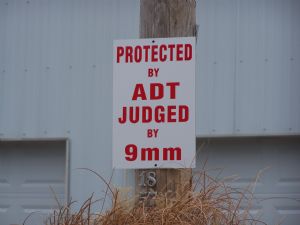 You Have Now Been Informed

After our breaking and entering, we put in an alarm system, an extra pole light and these signs. I think you know how I feel about it now.

18 comments on “You Have Now Been Informed”

That's great Donnie straight and to the point

What about the morons who don't understand? Have them see the pit bulls around the corner.:)

Banjo buddies usually aren't dishonest people and they are welcome at my home anytime. Now for the others, they just have to take their chances and hope for the best.

You bet I will. It really changed my life and view of things. It truely takes something away from you when this happens. Thanks for the comments.

wow you would think being out in the country people wouldnt have the guts.

Yeah Eric, it just doesn't stop here in the country, but we do take care of things a bit different here.

Good for you Donnie.

You bet they would. I like the way you think and agree that 00 would do the trick.

Do you guys have the "Castle Doctrine" in your state? Unlike our neighboring New York, we don't have to lock ourselves in a bedroom and hope the intruder leaves without hurting us.I know that you can feel violated when some mope breaks into your home, and deadly force is your right when your sanctuary is entered...God Bless the Second Amendment Brother! ;-)

We have our own Doctrine in this county Dr. Bob and I agree with you. They better not test me thats for sure.

That's tell'm like it is. When I was a kid there was a store down at the corner. The owner had a sign hanging up that read. Anybody caught stealing will be shot. Anyone who lives will be prosecuted.

Yes Dr Bob, we do. So if we catch em outside stealing we have to drag them inside after we shoot them.

Yeah Donnie! My security system is just to give me enough time to get the 44. Sorry you and your family had to go through that. Anybody that scare's a man's family like that deserves to get led poisoning!

I could not agree more. They better not test me thats for sure.

'How to know wood dryness' 8 hrs