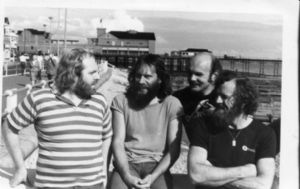 The Kidd dared me to put this picture up, he says people will have a real tough job guessing which one is me. kind comments please!!!!!

22 comments on “Guess the banjo player”

At a guess Joe. I think your the gentleman on the right at the front in the black Tshirt with a great beard and full head of hair???

The fat one... I mean the good looking one on the left.

thr full head of hair was me ,someone should have said "dont give up your day job!!what a banjo player we had eh??

by the way jane thanks for calling me a gentleman!!

Its the Hair Bear Bunch, I bet the Guy at the back had a bit of a Complex with all that Hair around him. I reckon your the one on the Left Joe. (in the stripes)

I agree with Eddie. Strips on the left, pleasantly plump fellow, nice bearded fellow and the handsome one. OK, I agree with most everyone.

Hey Kidd, you were right, we got em all guessing!!!

Three looking one way, and the one looking the other, just got to be you mate.

Only known you short while,my excuse for getting it wrong,sorry Joe ..

Guess we three others were looking for the talent and master of the jo joe!!

I vote for the arm on the left.

yeah the one on the left

Joe, I think you're the one in the middle. The eyes and mouth give it away!

Yeah gang , dont feel bad if ya chose wrong. If they coulda all seen a barber right before this was taken , woulda been a HECK of alot easier..LOL

Ok Ok, i give up, see if you look behind the great lookin guy in the stripe top, there in the background is two people walking, well i'm the woman on the left!!!!!

Well I wasn't gonna mention your penchant for high heels cos it's a broad and accepting world I live in, but you're right, that guy in the stripes................. he IS pretty. Mind you so is the skinny one in the middle .

Obvious! The one with the frets all down his t-shirt! (head needs re-newing) :)

I'd bet money on the one on the left, great picture Joe but where's the banjo?

joe you are to the left with the striped shirt

Yep guys, the stripe shirt it is, back in the days when all that mattered was bluegrass music and my banjo........a bit like today really!!!!

'Does this technique have a name?' 8 min