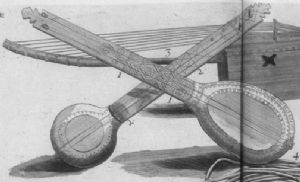 wow that is some history there.

Are you coming to Williamsburg this year?

Just spent the weekend with Bob Winans in Maryland with greg adams coming over.  Trying to find the links between Gus Cannon and the classic banjo style.  Any thoughts?

Not unless those MacArthur people get busy... ;-)

Bob Bostick, in Memphis, is a Gus Cannon fan.  Used to have Cannon's "last" banjo. (He also plays a great blues slide-banjo style.)  He might know something about Gus's background.  Bob's a BHO member:


I think it's about time that people began to realize that there was, (and is) a LOT of crossover, and influence, between the various banjo and guitar styles.

Classic banjo aside... banjo has always been primarily a folk instrument -- which has ebbed and flowed in popularity, and in in various forms, during various periods.

During the Minstrel Boom of the 1840s,  guitar players wanted to get in on the fun -- and started playing banjos in a "guitar-style". That eventually was refined into the formalized Classic fingerstyle.

Rural oldtime players, like Charlie Poole,  were seriously influenced by recordings of Classic banjoists -- like Ossman and Van Eps. (Get in touch with Hank Sapoznick about that... Ask Jim Costa about Uncle Dave Macon's early influences.)

During the Jazz Boom, many Classic 5-string players moved-on to plectrum and tenor instruments. And mandolinists also crossed-over to helped fuel the early tenor boom.  Some of the Old Time string bands used 4-string banjos (as did Western Swing bands):

"Traditional" Irish tenor banjo -- pretty much got started In Albany, NY and Boston, back in the late 1920s. Some dance band players, began doing Traditional Irish tunes on their resonated tenors...

Scruggs came from an environment of rural oldtime fingerpickers -- and jazzed it up, into Scruggs Picking, (And MANY of the oldtime pickers followed his lead, and switched-over to scruggs-style -- including Snuffy Jenkins.)