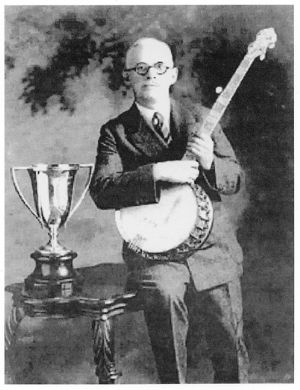 Cool photo, Ed. Looks like it has the "soft pedal" mute on it too.  Who owns that banjo now?  Where is the trophy? ===Marc

Hi Marc -
Yes, that's the banjo he used in the contest -- one of their "$500 models", probably a Montana #7 from the looks of it. And it does have the soft pedal. (He was probably playing on braided silk strings, too.  Looks much like braided trout line...)

Y'know the moment I posted that photo, it dawned on me -- that I've never heard where that trophy went.   Fred remarried (his nurse) late in life -- and it probably went to her estate.  I'll have to ask Eli Kaufman....

The official Corporate Seal for the Bacon Co. turned up a few months ago, on ebay.  The seller (who I know...) wants $10K for it. It 's a special pair of pliers with matching round dies, about 2-inches in diameter. It was used for embossing official and legal papers.

What did Eli say about all of this.

Does he or perhaps Bollman or Pzego have the trophy?

Eli's the one who first mentioned the contest to me, probably 25 years ago.  It's mentioned in his series of  articles on Bacon, in the late-'70s ABF "5-Stringer".  (Some of those great historical articles should be "re-published" on the ABF website.)

Don't know where the the trophy is. Haven't talked with Eli recently.

The Bacon Banjo Co. Corporate seal was up on ebay a few months ago.  It's an important historical artifact, an really should go to the 4-String Banjo Museum -- for safekeeping...

Jim did NOT get it. Don't know who did.

When I saw the small picture, I thought he was Steve Martin. Haha!