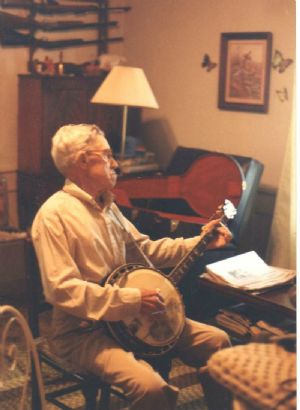 Martin E. Marshall (1905-1996) played in a sweet old-time 3-finger style & could follow a fiddle closely. He used a thumb and fingerpicks & had an index-lead roll. For many years he played with his father-in-law Ernest Stanley in a band called the Bell Spur String Band (they had an LP on the Heritage label, recorded at home in the early 60s. Originally released as an LP or cassette, the recording is still available in CD format. Martin played dance tunes such as Mississippi Sawyer, Home Sweet Home, local favorites like Old Joe Dobyns (AKA Chapel Hill Serenade), very old songs that had become instrumentals such as Wild Hog in the Woods, and Charlie Poole numbers such as May I Sleep in Your Barn Tonight, Mister? He and his wife Eula also enjoyed singing old hymns as well as ballads such as "Seven Long Years." This photo is from a 1992 visit to Martin and Eula's ancient log home near Laurel Fork, VA. He had homemade and plain banjos in his youth, but for much of his adulthood he enjoyed playing this Depression era Gibson RB-1. He admired Charlie Poole's style but his own playing was similara to a local index lead 2 finger style to which he&#39d added a third finger. He made a tone ring for it since it had none, carving it from hardwood. The celluloid pickguard was probably not original.

It's been 12 years since he passed and we all miss him terribly, a real gentleman, a brilliant but unassuming 2 finger player. He was always kind and helpful to those of us learning NC up-picking 2 or 3 finger banjo styles.