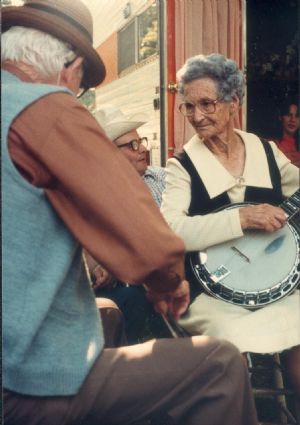 Photo taken by Alice Gerrard ca. 1983, possibly Galax. Bert is playing a 50s or 60s "bowtie" Gibson mastertone---obviously it was not her first banjo, but it was her only banjo at the time I knew her. She was frail & the banjo weighed about as much as she did! Bert played dance tunes in a spare, elegant clawhammer style but she also 2-fingerpicked tunes such as Cleveland's March, Little Black Dog, and County Jail

Cool picture. I would love to hear what she and Tommy sounded like together!

A friend who lives in W. Jefferson made recordings of them in the 1960s. I've heard the recordings (now donated to the SFC but they're reel to reel & haven't been digitized.) It's just as wonderful as you imagine. She had more brush than band banjo players like Kyle Creed & of course the overall rhythm was right on the money. They played dances together when they were young.

The way you describe her playing is how I imagined she sounded. I tend to like a brushier clawhammer sound than what is typically refered to as round peak style.