Perhaps I spend too much time pondering the social significance of Old Time lyrics.  Nevertheless, from time to time I have wondered about the meaning of “Greasy Coat,” which is an Old Time tune popular in Morgantown.   It’s actually almost an instrumental, but there are some short verses that are sort of  thrown in:

I don’t drink and I don’t smoke,

and I don’t wear no greasy coat.

I don’t cuss and I don’t chew,

and I don’t go out with the girls that do.

I don't kiss and I don't tell

And all you sinners gonna go to hell

The first verse. of course, is intended to be humorous.  I’m not sure how to explain this in a politically correct way, but let’s just say that a young women who chewed tobacco would be considered quire a catch, especially back in the day.  But what is to be made about the reference to a “greasy coat?”

Some commentators have suggested that “greasy coat” refers to a condom.  Andrew Kuntz mentions this in The Traditional Tune Archive (http://www.tunearch.org/wiki/TTA ), previously known as Fiddler’s Companion (http://www.ibiblio.org/fiddlers/).  However, I simply can’t find any pre-internet attestation to this possible link.  Hilariously, this was debated in the Banjo Hangout, where banjo players were concerned that this song might be inappropriate for children due to this possible link.  http://www.banjohangout.org/archive/184458 .

In any case, I was able to locate what I believe is a definitive early source for “greasy coat.”   A book with the annotated title “The Life and Adventures of Henry Smith, the Celebrated Razor Strop Man, (Embracing a Complete Collection of his Original Songs, Queer Speeches, Humorous Letters and Odd, Droll Strange and Whimisical Sayings, Now Published for the First Time, with an Accurate Portrait to which is added).  The book was published by White & Potter Printers in Boston in 1849, and contains a humorous poem, entitled Soap Ditty No. 1.  It tells the story of a handsome and virtuous fellow who is unable to find a wife because of his bad hygiene and failure to use soap.  Hence, his coat really is a greasy coat, and it is not until the end of the poem that he discovers soap and is able to was his coat and finally find a wife. 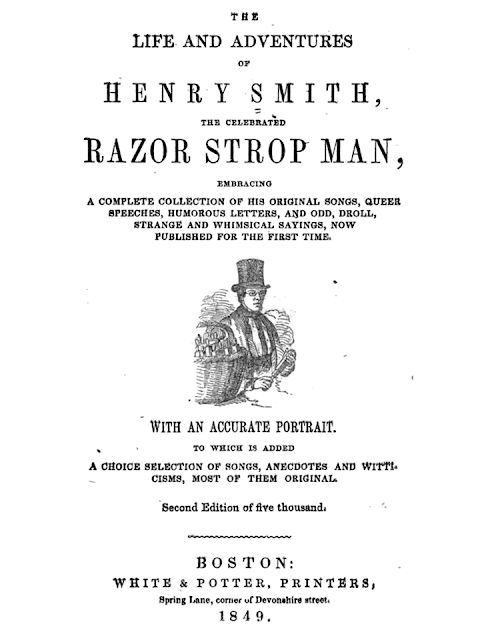 While a story I relate--

‘Tis all about a fine young man

That lived in the old Bay State.

His eyes were brown his cheeks were red

And free from tan or bloat--

His heart was brave and bold and true,

But he wore a greasy coat.

Now this young man he loved a maid

And tried her heart to win

But though he was a handsome man

He could not quite come in.

With whiskers round his throat

And dark and curling hair to match.

But he wore a greasy coat

“If you will marry me,

Myself and all that I possess

I’1l freely give to thee.

I’ve houses lands and money too

I’ll give thee every groat--

I ll give thee all, I can no more,

Myself and greasy coat.”

The maiden heard his plaintive tale,

Then laughed right in his face,

And said:  “to marry such a man

Would bring me to disgrace.

And are called a man of note--

But you’ll never do to marry me

For you wear a greasy coat

“The words that you have spoken,

My heart of hearts is broken.

He heaved a sigh, then wiped his eye

Upon his greasy coat.

Now it chanced as I was journeying

I met this young man in the woods

His eyes were sunk his cheeks were pate

He seemed bereft of hope;

I took him by the button hole,

And sold him a cake of soap

Oh he was happy a happy man was he

For he could clean his greasy coat

With the soap he bought of me.

With coat brushed up as good as new,

He hied him home again;

Again he sought his lady love,

Nor did he sigh in vain.

He asked her if she’d marry him,

Then exposed his coat to view--

She looked and blushing gently sighed

Oh he was happy a happy man was he

For he could clean his greasy coat

With the soap he bought of me.

The meaning here is clear.  The young fellow is a laughing stock because of his bad hygiene, and saves his romance when he learns how to use soap for the very first time to wash his greasy coat.  The “greasy coat” is to be taken literally, and thus in our Old Time song, the tern no doubt would have reminded audiences of the late 19th or early 20th Century  of the humorous buffoon that does not know how to wash himself with soap.

For me, that’s it, case closed, end of story.  It is just a reference from 19th century vaudeville, and not a reference to a condom at all.  So you moralists can go ahead and teach this  song to youngsters without fear of corrupting them (just make sure that they wash up afterwards).

One of the oldest recorded versions is from Edden Hammons of Webster County, West Virginia from 1947.  You can find that one on youtube.com.  Other versions that I like are from a 2008 Augusta jam at the top of this article, as well as a cut  from Rachel Eddy's cd, Hand on the Plow:

There is also a really fine version as an extra cut on her cd, Track 13, which is from the Morgantown jam or perhaps Clifftop.  In any case, there is an incredible blending between Bob Shank on Hammer Dulcimer and I. B. Browning on trumpet.

Speaking of unorthodox arrangements, check out this version performed on clawhammeer ukelele by Aaron Keim:

I worked in a guitar repair shop when I was in college. I know a lot about instruments of the 1970's and earlier, but fairly ignorant about modern instruments. Interested in Cello Banjo and other unique sounds.

'Who made this Warren banjo? Unusual hardware.' 3 hrs