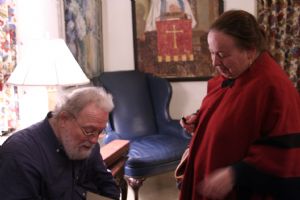 He signs a book he once signed SEVERAL years ago!

Jessy, next time you see this guy, you have to let him know how much I enjoy his work.

Did the Professor ever retire from good ol' USND at H? He must be Professor Emeritus by now. I missed him the one time I was on the road and passed thru Hoople. He was probably on the road elsewhere. :-) I wonder how many people know he went to Julliard? I have an aunt by marriage who studied there and told me she used to see him running around the halls. That was "pre-PDQ". Not sure if he ever actually graduated from Jullliard. But who cares, right?

Seeing as how he's all grizzle-bearded, I guess so. As far as I know, he did graduate from Juilliard or some other such institution. Thanks for your comment.