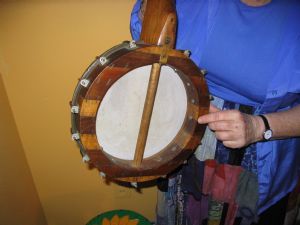 6 comments on “Closeup of the Wallhanger”

How thick is that rim? It looks to be over an inch. I see lots of staples on the bottom and It appears to be coming apart at the joints. Have you ever thought of taking it apart and regluing it?
Don't listen to me - I have this philosophy of "if it's broken, it's fair game- after all you can't make it any worse, it'll still be broken if you mess up."

If you would like a tinkerers suggestions, I'd be glad to help

Yup, I just measured. Just over an inch. Unfortunately, I have no talent for tinkering.

Hey, if it rings then play it.

Kevin, I can't get the blamed thing in tune! Maybe if I removed the frets......

Hello, it's a banjo!  The intonation on a banjo is like the weather in Chicago - changing by the minute.

Then again, going fretless is a grand idea.

Thanks for your comment. In fact, one of my two playable banjos IS a fretless--the one I'm holding in my avatar photo. So I'm treating the Wallhanger as a colorful mistake. In another ten years it will probably be an antique.

'Okay to use Painter's Tape to mark where the bridge goes?' 4 hrs