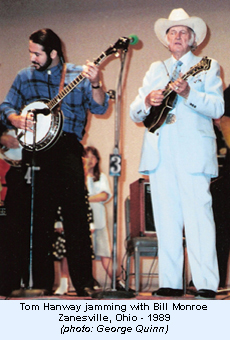 I was playing with the John Herald Band at the time, with Caroline Dutton on fiddle, George Quinn on bass.  We played one helluva show as I recall, being pumped since we were doing support for Monroe and a very tight Blue Grass Boys band, with Tater Tate, Blake Williams, Tom Ewing, the usual suspects back then.  After the show we all went out to a local restaurant for steak dinner, and we had a beer - some of us, that is.  Bluegrass.  It really doesn't get any cooler than this.  Monroe was good to me, and he told me that I sounded just like Don Reno, which was huge.  He liked my rendition of 'Green Mountain Hop', which I had gotten from Reno.  I was really into Reno at the time, but also Trisckha and Keith, who were my mentors.  Happy days!

jam'n with the man,  awesome photo!

'Stelling Banjos: Difference in sound from stock rims and the Pass rim' 1 hr