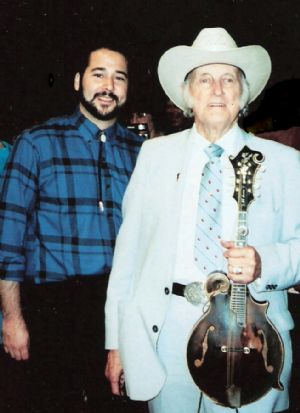 I was so blown away to play next to him.

That photo was done in 1989 after a show, where I remember signing my first autographs for two little old ladies from West Virginia.  They were so sweet and encouraging.  The best part was that after the show, I got to sit next to Bill and have steak dinner in a local restaurant - a porterhouse steak.

After soundcheck, he approached me in a very dignified manner, first taking off his hat and putting his mandolin back in the case, which was on top of a grand piano, and he offered his hand and said, "You're a fine banjo player ... you sound just like Don Reno (my rendition of 'Green Mountain Hop'), and well, he acknowledged me in a formal and constructive way, and I am forever grateful.  He liked me and my banjo playing.  I was in heaven, still am....

He didn't even notice my long hair or pony tail.   Later on, during the jamboree, he motioned me over to his microphone, His microphone, and had me take a banjo break after Blake Williams.  It was 'Sally Goodin' and I nailed it, playing a melodic version that I had worked up from the playing of Byron Berline.

'Nashville Blues! &#34Based on the Earl Scruggs Version from the Circle Album" - Randy White Banjo' 4 hrs

'Wind That Shakes the Barley' 5 hrs