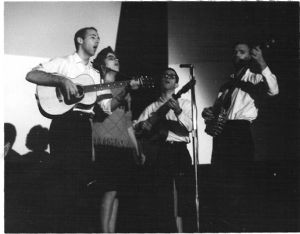 5 comments on “The Uncalled Four”

WOW . . . what memories this brings back. I had forgotten that the group's name was the Uncalled Four. ~ Karen Allison

Did you know Steve Comstock? I'm pretty sure he was there around that time. Friend of mine and a banjo player.

The name doesn't do anything to my memory, but that was 50 years ago.

I joined the faculty at SIU-Carbondale in 1971, a few years after the Uncalled Four appearance. I never heard of them, but there's lots of groups I haven't heard of. I also got the hear lots of good groups in concerts at SIUC.

Lew
Very few people have heard of the Uncalled Four. We were a last minute put together folky group to enter the SIU Harmony Show - a once a year talent show on the Carbondale campus. We won first place that year and then did a few after prom parties and student union dances. Then kind of broke up. Dottie Miller - our Ronnie Gilbert sounding lead singer - worked for the SIU Activities Office. So she got us together again the next year for the Harmony show. We won again. Shows the lack of harmony talent on campus that year! We won a weekend gig at a bar in Murphysboro. A few more after proms and union dances and we were done again.
I've only been able to recently locate Rich Bennet who lives Texas. I hope to get together with him next winter.

'Buzzing on neighboring, unfretted string - trying to pinpoint the cause' 2 hrs