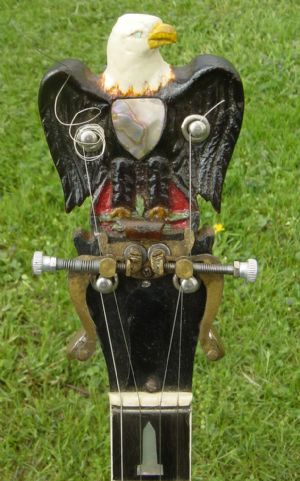 Hey, is this a copy of Johnnie's banjo, or is this his actual banjo?  There are many people that wonder what happened to it.  Thanks for the pics for sure.  I have never seen an actual pic of his d-tuners!!!  Way Cool!  He once lived in the N.C. area close to where I am located, and he is a legend among the players!!!  Thanks!

Johnnie made 5 of these to my knowledge.  This one I acquired a decade ago from the estate of a student of his.  It was  Johnnie's interpretation of the Gibson "All American" banjo.  I believe his widow has the one he played.  The handmade "cheaters" are unique as they can be operated by one finger by  flipping up or down.  Thanks for your interest!  I would love to hear from any of Johnnie's friends down that way.

Hi Borge! My name is Christopher. I took banjo lessons from Johnnie in the early 70's. I remember him playing his "eagle" banjo. I wanted to share what I remember about his banjos. He had one, Linda Slaughter had one, Al Jones had one, and I suppose the fellow you bought yours from was another. I would love to share information about Johnnie Whisnant. I've been doing alot of research on him and have some great pics on my BHO homepage. My father bought his "eagle" banjo from Al Jones back in the early 70's. The is the same banjo that Ralph Stanley used to borrow. Stanley took the eagle to Japan and recorded his "Live in Japan" back in 1971. I loved playing this banjo as a kid. My father also bought another banjo that Johnnie made. It was a Gibson that he carved, and still has another set of his "cheaters". Dad bought this banjo from Steve Spence who played with "The Grass Reflection" in and around Northern Va. back in the early 70's. Amazing banjo!Feel free to share more of what you know, as Johnnie was and will always be my inspiration.
Sincerely,
~Christopher~
banjohangout.org/my/BigWhisnantFan

Hello Christopher. Nice to hear from you. I met Johnnie in 1965 and started lessons back about then. We remained good friends until his death in the early 90's. I bought the "Eagle" banjo from Jim Boor's widow a few years back. It was not finished at that time. Buddy Davis finished it for me and did a very nice job. As far as I know there are 5 in existence. I did not know that Al Jones had one. I saw a lot of Al back in the 60's. June sent me an unfinished neck after Johnnie died. He had carved the eagle on the head stock but never got beyond that as he was in poor health. I kept it for over 10 years before deciding to have it finished. I will send you a picture of it if you give me your email address. There are quite a few friends of Johnnie still in the area and we remember those times with fondness. I have some home recordings if you are interested. Talk later. Borge

'Son of the Writhing House' 5 hrs

'Picking and Bouncing at the Same Time!' 9 hrs