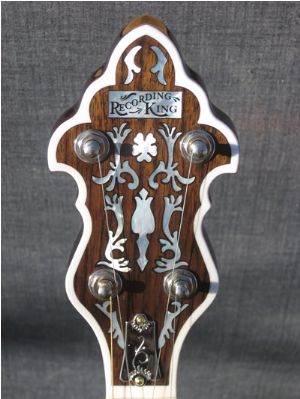 Better view of truss rod cover. Original was damaged when I bought the banjo; I don't know if it happened at the RK factory or at the store where it was set up). I had to redo the set up as it was done incorrectly (an understatement). Someone had sanded the top half of the cover, presumably after they scratched it up as there is still a slight scratch on the head just above the cover. I guess I should be glad they didn't try to sand that as well. Using the damaged truss rod cover as a pattern, I made this one out of german silver. I engraved it with a chasing hammer and cobalt chisel and polished it with jeweler's rouge. I was going to put my name on it, but thought it too gauche. Another area I had to fix was the front of the resonator. As it came from the factory it had gobs of paint on it and fingerprints where they handled it before it was dry; it also had several areas with no paint (just a purplish undercoating). I used 0000 steel wool to get rid of the prints, the gobs, and the runs, then I painted it and used a razor blade to clean up the overruns on the binding. The store finally answered me, but I've never heard from RK despite my repeated attempts (e-mails and letters) to contact them. All I wanted was a replacement truss rod cover. I didn't get it so I made one and I must say it's a LOT better than the plastic cover! Maybe I should go into business?

'Nickel plating, then and now.' 4 hrs