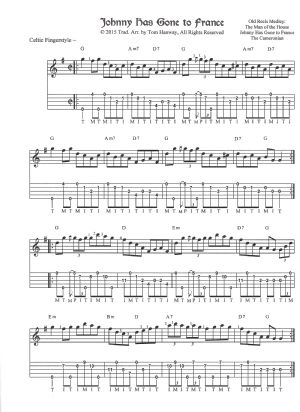 Johnny Has Gone to France

This is a lovely reel that I find works beautifully in between 'The Man of the House' and 'The Cameronian', here presented in Celtic fingerstyle.

15 comments on “Johnny Has Gone to France”

nice one Tom. interesting c# in first part. I find it's easier for me to play the f# in B part on 7 fret second string instead of 11th 3rd and that triplet in second last bar i can play the A note on 1st string and B not on 5th string- minor detail, great arrangement of a tune I can't find anywhere so far.

Nice! I see you added the fiddle part above the tabs - did i play an influence there? I do that for a couple of reasons. You've been playing banjo a lot longer than me, so you can probably look at the tab and say, that's a high c#, but I can't yet, so having the notes above helps reinforce that knowledge for me. Second, if you only have the tabs, it tends to solidify the arrangement, but if I have the notes in front of me, then I can look and say, why am I grabbing the high g on the 5th fret of the first string instead of the 8th fret of the 2nd string? Which I see is what you did in the B part, and that makes more sense than my arrangement of this piece.Your setting is of course the O'Neills one, and they are pretty close, but there are a few things I think I like better in this arrangement. I'm not convinced about the c# though, I don't think I like that. Somethings about my arrangement are dictated by the mechanics of doing clawhammer, I think your Scruggs style allows you more freedom in many ways, but there is some charm about the rapping sound of frailing too. In your A part you are able to grab the open g string, where as I have a hammer on from the low d string, from the 4th fret to the 5th fret. It's kinda awkward. I was temping to write this as an m-arp from the 4ths to the 3rd string. (Ken Perlman's terminology) At first I found m-arps awkward but I've been using them so much these days that I think they sound better and clearer than hammering on, especially with my weak pinky finger.

So, my setting comes from Ryans, and yours from O'Neills, now by the folk process musicians would naturally evolve a version they like. However, this isn't really a natural folk process, this is an intellectual effort. I feel like taking the best of my setting and the best of your setting (in my opinion of course) and combining them. Do you have an opinion about doing that? I mean it's not classical music, but I somehow feel like I'm not being faithful to a published version.

One last comment, I really like how you have a reel's medley at the top right. Now is this a historical medley you found somewhere, or is this a suggestion on your part of what songs would go well together? Thanks!

Thanks for the explanation too, I really like the idea that it is just a roadmap, I think you said something similar in your "Complete Book of Irish & Celtic 5-String" - I look forward to the new book coming out.

Hey, thanks guys! Well, first of all, my inspiration for the medley arrangement - the tune choices and feel I give the tunes - was from Linda Hickman (formerly Celtic Thunder). She never plays too fast, and she has a beautiful lilt to her flute playing. The melodic contours of all three tunes line up beautifully, and so do the embellishments, owing as much to flute as to the fiddle.

Also, l don't stick to this one setting, and while it may seem closer to O'Neill's, I keep in standard notation in order to put in fretting-hand fingerings, same as my upcoming Turlough O'Carolan (20 classic harp tunes for 5-string banjo and all instruments) book - Summer 2015 release. So, this is the standard modus operandi that I use for Celtic fingerstyle method when I play up the neck, and it's not a fiddle setting, per se.

To be honest, the tunes I prefer to couple it with use embellishment that I learned from the flute and pipes, and some fiddle. Now, the graced triplet occurring in measures 3 and 7, also measure 3 in the B section, this is a feature of Sligo-style fiddling known as a "short" roll, typically occurring on the second and fourth beats of reels and hornpipes. (Here it's found on the second beat.) I learned "short" and "long" rolls from Sligo-fiddling maestro Tony DeMarco from Brooklyn, NY, who has a wonderful tutor co-authored by Miles Krassen (who did the modern O'Neill's book) where they present tunes with three different levels, going from more simple to more complex ornamentation. It's self-published, awesome and still available, A Trip to Sligo: A Comprehensive Guide to the Art of Irish Fiddling (1978).

So, my influences go back to my session days in NYC, to Paddy Reilly's Music Bar, to Brian Conway (fiddle), Andy McGann (fiddle), and Linda Hickman (flute) and Tony DeMarco (who were partners for many years).

Multi-instrumentalist SÃ©amus Egan (of Solas fame) was a huge influence, and he used to tell me not to get bogged down in settings! I used to go to him to get tunes off the tenor banjo, but he was equally adept at flutes, whistles and even the pipes - just incredible. I played many a bluegrass/Scottish medley, reel and hornpipe with Scottish fiddler, Johnny Cunningham, RIP, who conspired a lot with SÃ©amus. It's learning from players who are a living, breathing part of the tradition - that's where all the fun is! (Too many have died in recent years, so sad.)

As for me, I don't stop tinkering with a tune just because I have transcribed a particular setting; on the contrary, the setting is not the tune at all, it's just a map, a snapshot, a visual key or representation, but it cannot convey the music as played and felt, or the spirit of the living tradition, which is to experiment and make tunes one's own. Last, I have other ways of playing JGTF, both adding and leaving out ornamentation.

@Peter, there are many alternative fingerings for certain notes, and I made myself get good fluid with both the F# at the 11th fret/3rd string and the 7th fret/second string. It's also there at the 4th fret/1st string, and I play it in all three places, on a whim.

In sum, tabs are not to be taken literally, and they are rigid by themselves, and I certainly don't stick to one setting every time, either for this tune or any other tune. That would be like reading from a script every time one wanted to express something.

I have another version of this where I play cascading triplets (B section) and also some triplets where the first two notes are written as sixteenth notes, with the last note of the triplet written as an eighth note (or in 2/4 two thirty-second notes followed by a sixteenth note). This is an obvious Scottish fiddling approach, and I came up with a Scottish-type setting for this. One could easily turn this tune into a strathspey, adding Scots-snaps and the like, but I won't torture anyone with that kind of setting.

This is a life-long endeavour, a worthy one, and we'll get there, one tune at time, one phrase at a time. So thanks guys for inspiring me, I appreciate it! ;)

Sorry, John, I left out a few folks whom I needed to credit, so our posts got reversed. Best ~ Tom

I had to look Linda up after your comments, I hope this isn't out of place, but wow, some beautiful music
youtube.com/watch?v=mTABrHRlkHU

thanks for all that info Tom, wow you've done a lot of playing.
Tom and John, had a listen to that clip you've put there John, I recognise the 2nd and 3rd tunes but I can't name any of them, can either of you enlighten me?

Ooops, you probably didn't click on the "show more", it's listed as
Reels: Lucy Campbell / Cooleys / The Banshee.

thanks John. i actually woke up this morning with the names of the last 2 in my head. I don't know Lucy Campbell -yet. thanks

Some of the best musicians in our session in Hamburg can never tell me the names of the tunes, because they mostly just learned them by ear!

That's cool, but beware of people who exploit that old myth: Quite often, players don't want to reveal their sources for tunes, or want to appear more talented and/or authentic for learning by ear. That can be a form of snobbery when players really do know titles, and they often do, but they're not telling, not telling you that they read music as well as ABC notation and that they get a lot of tunes from the Session, or O'Neill's, or Coles, or Ryan's Mammoth Collection, etc. So, it could be elitism hiding behind the veneer of false modesty - oh I learn by osmosis ... I don't really know what I'm doing.

And then we meet the racial bigots, critics and curmudgeonly purists. Beware of racial views lying inside authenticity arguments. These usually have either a genetic or authentic instrument component. These types of opinions can border on an ugly racism or elitism that has no bearing on freely participating in or contributing to a musical culture. Some top players really do pick up tunes by ear, Tony DeMarco being a prize example (a Sligo-style fiddling master). Many players can read, do read, and use audio and video. They just lie about it a lot, falsely believing that they are more "authentic" than someone who expresses honest intellectual curiosity. ;)

heh, yeah, I think you're right, I've occasionally seen that kind of thing. Our group is really good on the whole though. Most people are very generous in sharing their knowledge with you. One fiddle player donates her time and holds a Learner's session every other week for example. And some of that learning by ear, meant hours upon hours of sitting with a CD or records back when they learned, and playing over and over again until they got it, so it's easy to remember the tune, but the name can still honestly slip your mind. There is an amazing guitarist there, who shows me all his tricks, and answers all my questions - and even invited me to his house once to work on a tune.

I think that attitude applies here too, some of the time and especially with the old time scene. Isn't it true that 'the jam session' is a more recent phenomenon? I think I've heard in the old days people had lessons of the masters.

'Opinions on a Stromberg Voisinet ' 1 hr