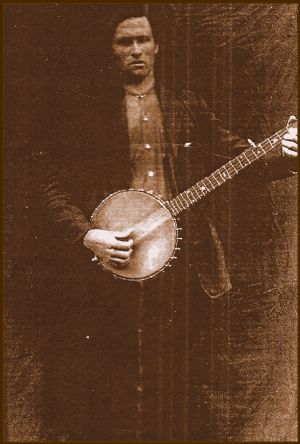 4 comments on “Manco Sneed with banjo”

The photo, which I'd never seen before, is from a Sneed family ancestry.com website.

Great photo. I didn't know he played banjo. Didn't know M. Martin did either! Are there recordings of them playing banjo?

There are several cuts of Marcus Martin playing banjo. He played John Henry & Honey Baby, but my favorite was Last Gold Dollar is Gone. The banjo stuff is on 2 different CDs, When I Get My New House Done, put out by the NC Folklife Institute & the Field Recorders' Collective CD of Marcus Martin. He had a spare 2 finger style, very nicely syncopated rhythm and interesting phrasing. I'd never seen the photo of Manco Sneed with a banjo, & have never heard recordings of him playing one, but from the picture, it sure looks like he fingerpicked.

Thanks. I'll do some investigating and see what I can come up with.

'An example of a fake Martin guitar' 1 hr

'On The Road Makin' Banjo Mutes For Fire Season' 7 hrs