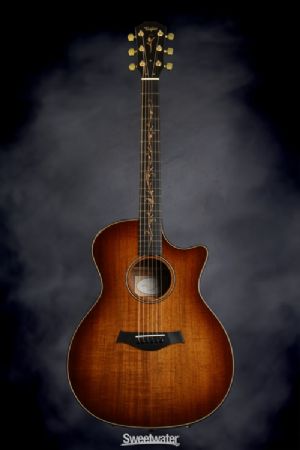 New Koa guitar on the way :)

Getting a new guitar--its a little bigger than Little Star, but not as big as a dreadnought. Just couldn't resist all that KOa :)

Awesome. I have Koa OOO made by Andy Todd in Nashville, It is absolutely incredible. Koa rocks!

John--thanks for your supportive comment. There is no really good reason for me to buy this guitar except I've always wanted an all koa one & everyone that I know that has a top of the line Taylor--they sound really good--they just don't have all the charisma of hand crafted :) And I am spoiled as I have been playing my Ken Miller Little Star (which has a world class sound)--but think this Taylor is going to be really fun--and it is a special edition this year--they have a whole koa series. They also have the all koa in the mini- series this year--and I'm sorely tempted to get it too---hmmm :) Hey--John--I've actually started a vocal cd at gatorbone studios and may have it done by the end of the year--I've been taking vocal lessons for two years now and its now or never :) Hope someone will want to hear me sing :)

Congrats on the guitar Mary! I think we're going to need a video of you playing it and yeah, you can sing on the video too. :)

Hey--this guitar came--it was beautiful to behold--but extremely hard to play--it just fought me on the fingerboard & my fingers were sore after an hour--Bob tried it & it fought him too--so I sent it back. It was beautiful--but just can't have a guitar that doesn't like me :)