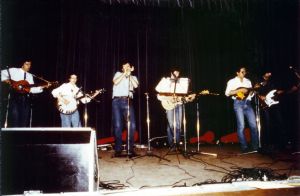 Although three of its original members were playing together since 1979, Crazy Banjo Band formed officially in 1980 but begun performing live only a year later. At first the group played rather ingenuous renditions of well-known bluegrass standards but soon refined their repertoire adding four-part harmony vocals, fiddle tunes arranged for dancing, and lately tried out original arrangements of popular country tunes with the addition of harmonica and electric guitar. The group toured a lot for a couple of years and faded out in the spring of 1983 when they met a record manager who offered them to cut a record. Following the departure of both co-founder guitarist and mandolinist, the band changed its name to Erbablu Style and signed with the record manager. L to R: Riccardo Frontini (guitar, vocals); myself (fiddle, 5-string banjo); Arturo D&#39Angelo (5-string banjo, guitar, harmonica, spoons, fiddlesticks, vocals); the late Stefano Galimberti (guitar, electric guitar, vocals); Luca De Pasquale (mandolin, vocals); Marco Feletti (electric bass).