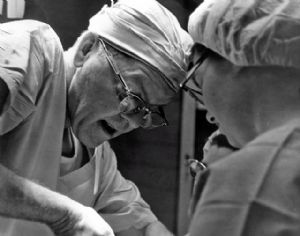 Building a fine banjo I'd guess!

I took that photo and if I recall, he was singing 'Ivan Skavinsky-Skivar' to his nurses.

Actually, he was doing a repair job on a feller who had been in an altercation at one of our local knife and gun clubs down on South 81.

Any man that could run the lethal "Motorcycle Boardtracks" of the twenties then turn his attention to Doctoring....What can you say?? Oh yeah, and play the Violin too.

Well, John. I haf to tell you, He gave up the fiddle when one of his med-school profs told him he needed to keep his fingertips as sensitive as possible for surgery. But man could he play the french-harp! And, he even asked me to teach him a little banjo when he retired. (the 2nd time.)

And he WAS singing 'Ivan Skavinsky-Skivar' to his nurses. His nurses would practically arm-wrestle to go into surgery when he had one scheduled.