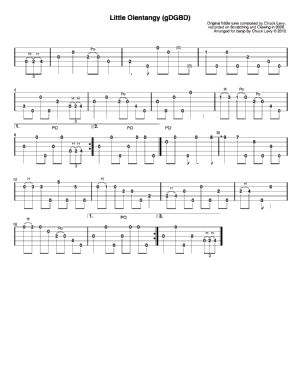 Stuff that might make this tune more difficult: Besides the syncopations, there are open-string pull-offs in measures 8, 9, 10, and 17. Big Scioty, which commemorates the Scioto River, is one of my favorite tunes, made especially special since it runs through Columbus, Ohio where I used to live. At some point, I decided that the Olentangy, the smaller of the Columbus' two rivers (they join near downtown) deserved its own tune, so I made up this one, Little Olentangy (Composed on the fiddle by Chuck Levy ÃÂ© 2006, arranged for the banjo ÃÂ© 2012). According to Wikipedia, the river now known as the Olentangy was originally known as the "Keenhongsheconsepung" which literally translated as "stone for your knife stream" based on the shale found along its shore. Early settlers translated this to "Whetsone River". In 1833, the Ohio General assembly passed legislation intending to restore the original native American names to some Ohio waterways, but mistakenly gave Whetstone River the name "Olentangy", Delaware for "river of red face paint" which had actually belonged to the river that is now known as Big Darby Creek. Little Olentangy appears on Scratching and Clawing, my first CD, on Red Dog Records, 2006. I am playing clawhammer style, on a Bart Reiter banjo. The pot is an old Vega Tubaphone, with a new 5-string neck.