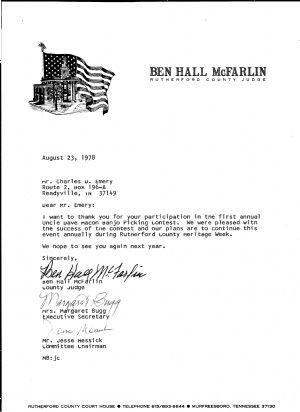 Back during the summer of 1978, John Balch and I went to a banjo picking contest in Murfreesboro, Tennessee on the square called the Uncle Dave Macon Banjo Picken Contest. John backed me up on guitar and mandolin. We placed 2nd and had a nice time. Attached is the letter from the county judge, secretary, and contest committee chairman. The Avatar Photo is the same day with John and me. A couple years ago we sat at the same court house square recalling what a great time it was. Since then John has gone on to win several championships and do much...as many of you know.

What great memories! I'm glad you kept that letter. Jesse Messick founded Uncle Dave Macon Days. He died a few years ago. Hard to believe the festival is 33 years old this season. I guess that means you and I are a bit older too....

Yea John it was a good bit of fun wasn't it. Seems the next year or so after you took that little SSS Princess that I should have bought from you down to UDM and took first place yourself. If I recall you picked Railroads and Gambling. I knew Jessie came up with the idea for the event. Glad he did. Like most good ideas it becomes bigger than expected and out lives most of us. David E.

Back then we had only one banjo category. All styles competed together. Because it was Uncle Dave Macon days...and jugded by folks like Dr. Charles Wolfe...there was sort of an unspoken rule that an old-time player would win first place. The best a bluegrass picker could hope to do was second. It was that way until I took over the judging in 1982 or 83. At that time, I split the contest into two events by style.

So...your 2nd place finish, in the first annual Uncle Dave Macon Days, was really the same as winning the bluegrass category. You were the best bluegrass picker in the event that year for sure. Have you ever thought of it that way?

No John...I had not considered it that way but think in the future it seems like a good way to describe it. I always told folks I took 2nd place and in the following years real banjo players showed up so I stopped competing. David E.

'What Shall We Do With A Drunken Sailor' 10 min