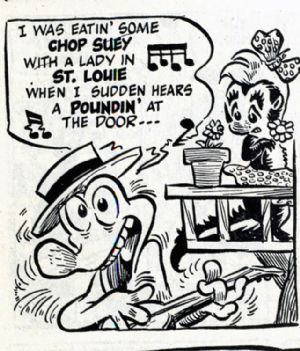 One of my early Heros

I absolutely loved Pogo! Albert cracked me up when Friday the 13th come sneakin' up on Thursday, & he hid under the bed.

I've been a Pogo fan all my life.  I started reading it in the 40's when it was "Little Bumbazine and the Alligator".

I got so hysterical at Albert when he had an epic battle with a diving board that my Mom hid my stash of Pogo funnybooks because she thought they were interfering with my health.
I still have a pretty good collection of Pogo books

Me to pogo fan.
Got the ALBUM.
Dad had a few books.
Unforgettable line from Walt Kelly's re-telling of the Bremen Town Musicians.
Maxwelton, the donkey, wants to be in the band, and they ask him can he sing.
He replies that his singing ability is ITSELF celebrated in song!!
To quote
"Maxwelton's brays are bonnie!"

Hey! I remember the Brementown episode 'n I think you made that up! Purty good, tho!

I was such a Pogo devotee that Pogoisms still decorate my conversion til yet.

Some Pogoisms have become part of the language, notably the bittersweet "We have met the enemy and he is us."

Walt Kelly and Al Capp were two of my most admired political cartoonists. I don't recall seeing any compilations of Lil Abner over the years but I have a lot of Pogos. Still read 'em and still laugh my head off!

Who but Walt Kelly could have his critters think of building a house out of water, because, if it leaked, the rain would seal it up?!

Friday the thirteenth come on a Wednesday this month.

'Playing Over the Scoop' 2 hrs