0 person likes this
Friday night Moving Day! had a gig at a Christmas party in one of the neighboring towns. Well, not exactly in a town, but in one of the many wooded areas that make up Oslo. I've been there alot, but I remembered it being a pretty short walk to get there. We weren't supposed to play until about 21.30, and about 18.00 I went to check the place out. Well, the walk was a lot longer than I suspected, about a half a mile, in fact. We ended up putting the string bass on a snowmobile, and the rest of us walked. We had a great gig. Were originally asked for 5 tunes and ended up playing about 11. Great audience. 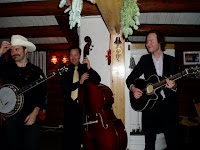 Saturday and Sunday I was the tenor soloist in concerts (Bach Christmas Oratorio) in Fredrikstad, a town about 90 minutes by car south of Oslo. Saturday was good. Sunday night we got down there and I had forgotten my concert clothes. I ended up borrowing a pair of trousers that Mrs. had on, and a jacket from one of the men in the chorus. The concert was good. I remember thinking 'My glasses are filthy, I have to pee and I'm wearing my wife's trousers, but other than that, things are going pretty well.

What an interesting (and rewarding) life you lead, Paul.

Great story. And TC is right, your life is just a tad on the cool side. You wear it very well my friend.

'Who are you listening to right now?' 1 hr