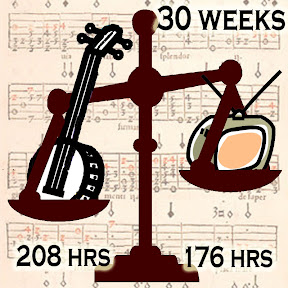 I really enjoyed my first lesson with Dave.

I'd asked Dave if I could record my lessons with him so I could review them later. The answer was not just yes, but hell yes, because Dave really thinks it helps. I listened to the recording from that first lesson and here's what jumped out at me:

My homework is simple: Work on Good Old Mountain Dew, the simplest of the half-dozen songs Dave asked me to choose. Here are the ground rules:

Due to schedule conflicts, I'll have two weeks to work on this before my next lesson.

Remember to paste the URL.


Be the first to comment on “Banjo versus TV: Week 30”

'Need information on this Bridge.' 2 hrs

'how much is a StewMac Eagle banjo worth' 4 hrs

'If you're black, by Big Bill Broonzy' 5 hrs