I’m sure most of you received the recent Banjo Hangout email which advertised the new, and very nice, 2016 Banjo Hangout T-shirts. As I was looking over the names of all the great banjo players included in the acrostic on the shirt—Earl, Bela, Noam, J.D., Sonny—I thought, “Isn’t it a shame that even today, in 2016, when we think of great banjo players, the names of women do not readily come to mind?” (Thank goodness for Alison Brown!)

Of course, being a female banjo player myself, the names of other women who play banjo do come readily to my mind: Kristin, Cia, Lynn, Molly, Becky, Rhiannon, Gina, Gena, Pam, Julie, Robin. So I decided I would make up the same acrostic—using the words Banjo Hangout Players Union—and fill it in with the names of female banjo players. Here is the result of my handiwork. (And a big thanks to Red Henry for doing the layout on the computer.) 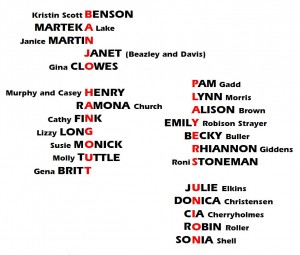 As you can see, I included first and last names so you would recognize the women immediately. And even with 24 letters, I couldn’t squeeze in all the women that I know who play banjo professionally. Furthermore, I’m certain that there are many more women out there laying the thumb to the five that I don’t know about, especially old-time players and younger players.

Now, knowing that I will leave out many women who should be mentioned—and for that I apologize in advance—I am going to include a list of more women who play banjo professionally just because I want everyone to know that our numbers are large—and growing! I welcome additions to this list!

Women Banjo Players Not In The Acrostic, In No Particular Order

Most of these names I was able to pull right from my book Pretty Good For A Girl: Women In Bluegrass (2013, University of Illinois Press). That was one reason I wrote the book—to serve as a reference for anyone who needed information like this. (I would have hated to have to put this list together from scratch!) But that book is already three years old, so I’m sure the ranks of banjo picking women have swelled considerably. I welcome your additions! The book is available from Amazon, and I am completely happy for you to order one from them. They do make it easy!

And while I’m in the promotional part of the blog, our Intermediate Banjo Camp will be held March 18-20 in Winchester, Va. We still have one or two spots left. Gina Furtado Clowes will join Casey and me in doing the teaching. This is the first time we’ve added another teacher and we’re really excited about it. Gina lives just down the road about a mile or two and she’s a kick-ass player. And a wonderful person. She’s now playing with Chris Jones and the Night Drivers as you probably know. We’re looking forward to a great camp, with plenty of emphasis on jamming and making up your own breaks to songs! Hope to see you there!


23 comments on “Bunches of Banjo Picking Girls by Murphy Henry”

Thank you for this! The fact there was only ONE woman on the shirt is the main reason I opted out of getting the shirt this year. I've got them every other year for the past 3 or 4. There could have easily been way more on the shirt.

I'm reading Murphy's book at the moment. It's a great read.

Your book is great and very informative. I would love it if someone would write one on women in clawhammer.

Thank you for doing this and recognizing so many excellent women banjo players!

Murphy, you inspired me to learn to play. I first saw you at the Catfish Festival in Crescent City, Florida back in the early 80's, and I thought it was awesome to see a woman playing the banjo. I bought a banjo and learned a few songs, but then gave it up because my kids were small and I just couldn't find time to practice. I've recently picked it up again, and was happy to see you're still going strong. I can't wait to read your book.

Cynthia Sayer is a fine banjo player too.

Great post - I had no idea there were so many female banjo players.
p.s. I want that T-shirt!

I can't believe you missed the First Lady of the banjo, Roni Stoneman!

Roni is in the graphic!

Hey--there are lots of good banjo girls on the 2016 Banjo Babes Calendar & Cd. Before I was invited to be in this project--I had never heard of any of them--but the compilation CD is really awesome--with all kinds of Banjo styles & traditional and original songs and pleasing voices and banjos. I gave quite a few out as Christmas presents & heard back from several folks that they were greatly enjoying the cd. There are so many talented lady banjoists out there--thanks Casey & Murphy for drawing attention to us :) By the way--Erin Inglish produces the Banjo Babes Calendars & cds and does a really nice job & none of the babes get any profit from it--not exactly sure Erin breaks even on it--but she wants lady banjoists to be heard & the calendar is just a way of calling attention to the cd and music. LOL :) here it is the 21st century and we still have to sell pix of our bodies to move the cds which should really sell on their own because they are good listening--but hey--I'm thankful to have a sellable body :)

Samantha Bumgarner...I had to check the spelling !

BB Bowness, from New Zealand and now living in Boston is an up and coming young player. Watch for her and her current project "Mile Twelve"

Gail Fratar, Linda Jo Webb-Huber, Annie Leist, Gloria Attune, Cathy Barton. All save Annie Leist, have been recorded and Ms' Attune (Augusta Bottoms Consort), Webb-Huber (Bluegill Buddies) and Barton (with Dave Para) can be accessed via the 'net. I'm not sure about Ms Fratar but she has recorded at least one CD and her playing is impeccable.

Ooops! didn't see Cathy Barton Para (I don't think of her as "Para" though she definitely is!) and there is also Idabell Brandt who resides in Gasconade county, Missouri and is a contemporary of the great woman fiddler Vesta Johnson. We Missourians sometimes feel "left out" but we have a very strong Ozark oriented tradition comparable to y'all "back East" in Appalachia and the Cumberland plateau. That tradition has given us many fine female musicians elder and youth, especially those from down in the Stone county area of Arkansas and out "west" near Sedalia and Tipton, Missouri.

Janet Burton, a member of HBO, player, translator of of time fiddle music for the banjo and composer.