Posted by Texasbanjo on Monday, December 8, 2014 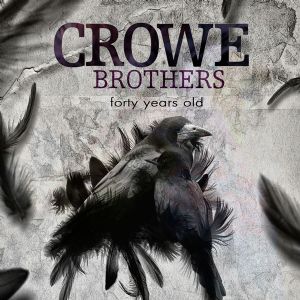 The Crowe brothers began their career playing bluegrass and gospel with their dad and in various bluegrass bands.  In 1975 they teamed up with Raymond Fairchild and moved to Maggie Valley.  They stayed with him for 15 years.  They then began The Crowe Brothers and continue making music today.

The album 40 Years Old is appropriately named, as not only is there one song by that name in the album, but they have been making music for 40 years.

During their 40 years they have received recognition from SPGMA for Best bluegrass rhythm guitar and best instrumental band.  They were also nominated by IBMA in 2009 as Emerging Artist of the Year.

There are three old time country songs in this album.  “Lost Highway”, an old Hank Williams song, “Excuse Me, I Think I’ve Got a Heartache, a Buck Owens song and a Hank Locklin song, “Send Me The Pillow That You Dream On.”  That’s the kind of country music I enjoy.

One of my favorites in this album is a Tom T.  And Dixie Hall song “I’ve Got the Moon On My Side” which is an upbeat catchy song.  Great backup and breaks by the banjo.

“Someday My Ship Will Sail” is one of the gospel songs on the album.  First time I ever heard this one I was sitting at a festival listening to the Lewis Family.  Great gospel song. The other gospel song was written by Wayne Crowe and is named “Where Will You Be”.  Very upbeat gospel song with a good banjo break.

The album title song “Forty Years Old” is a song of parents remembering their child during his childhood and their thoughts as he turns 40.  As a parent, I can definitely understand their feelings.

One song that a lot of us can relate to is “Living In A Mobile Home”, which is about a couple who live in a motorhome and travel about the country.  Reminds me of going to festivals and dragging a car behind the motorhome.

This album is not what I’d call a traditional bluegrass album, but there is one song that is definitely a hard driving, fast bluegrass song: “Two Feet On The Floor”. Listen to the banjo backup and the banjo and mandolin breaks.  Great song!

“Angel Mother” is a tribute to the Crowe’s and Blalock’s mothers.  Sad but beautiful.  Wonderful harmony on this one.

It’s an album that I will listen to over and over.

I knew their daddy Junior. We had a dance team "the Smokey Mountain Cloggers" He played for us locally, we tied to get him to go to New York but he would not leave Rabun County to fly on an airplane. Bobby Thompson a friend of Jimmy Lunsford's from Asheville played for us. He was on Hee Haw and several shows. Junior was a good one and so are his boys.

'Were You There When They Crucified My Lord?' 1 hr

'Long, but interesting explanation of the Q-Anon methodolgy.' 2 hrs

'Yet another drum dial question' 2 hrs