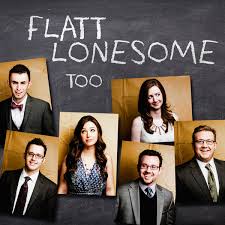 What can I say I love Flatt Lonesome. After hearing great songs from their self-titled debut album I couldn’t wait to hear what they had coming next. I was able to recently review their new album: Flatt Lonesome Too. If you liked their first album you will not be disappointed with this one.

If you're unfamiliar with the group, they sum it up best themselves on their webpage: “FLATT LONESOME is a young, new group of pickers fresh to the scene. While deeply-rooted in bluegrass music’s historic classics, they also have an energetic flair for country sounds, progressive jams, and soul-stirring gospel music while never forsaking their traditional essence. If you love high lonesome harmony, soaring sibling vocals and powerful bluegrass music, then you will love FLATT LONESOME!”

Now back to the music.

The album starts off with a high tempo Randall Hylton song, “So Far”. It’s one of those (as I like to say) “chickin’ kickin’” songs that make you drive too fast and get stopped by the police. Powerful vocals from Charli, and great picking and playing from everyone. Being this is Banjo Hangout I’ll have to say that Paul did a great job picking that Gibson. Last I checked this song is still at number 2 on the Bluegrass Today weekly BillBoard.

Second song is a group original, “Making it Through the Day” written by the group’s Paul Harrigill. It’s a slow ballad with lead vocals from Paul’s bride Kelsi.

Third is a Tim Stafford and Barry Ricks song, “Dangerious Dan”. I really like this song, which is sung by Buddy, with great harmony from sister Charli . If you’re into moonshinin’ and preachin’ you’ll like this song. Good overall Bluegrass song. Though I did have to look up what a tiger moth was. Who knew a moonshiner could fly a bi-plane! This song is also on the Bluegrass Today Bill Board debuting at 15.

Forth song “Never Let Me Go” , was written by Kelsi. This song has a great Texas Swing to it. You’ll be singing along and two steppin in short order. Kelsi has lead vocals with harmony by sis Charli.

The fifth song is another one of the “chickin’ kickin’” songs written by Randal Hylton. Slowly Getting You Out Of The Way, sung by Buddy with harmony from Kelsi and Charli. And who can’t resist mentioning the in your face banjo playing from Paul. Great breaks from Michael, Kelsi, and Buddy round out a great song.

The sixth son is “I Can’t Be Bothered”, written by John Travis Howard. Charli with lead vocal and harmony from her siblings Buddy and Kelsi. I found out after listening to the song it was originally done by Miranda Lambert. I love this version. I’m sure it will be getting plenty of air time, soon.

The seventh song “He Still Hears”, was written by Kelsi, Buddy, and Charli’s father Pastor Dolton Robertson. A nice gentile gospel song that makes you think of all those time you prayed and wondered if the man above is listening. Well like the song says, he’ll hear you.

The next song is another one of my favorites. It’s got a darker tone, which I like. Buddy does a great job singing with his sisters “It’s Probably Just Her Memory Again”, written by Billy Droze, Chris Myers, and John Sherrill. Buddy did an epic guitar break about half way thought the song which I really like. So after listing to this song you won’t look at shadows and unknown noises the same, cause “it’s just her memory again.”

The ninth song is “Letters Have No Arms”, a 1949 Ernest Tubb song. Kelsi does this classic song great justice, with harmony from Charli and Buddy. Just a good old classic country song, that’s maintained that old country feel. Ernest would be proud.

Next is another one of those blazing fast “Chickin’Kickin’” songs. This one is actually a high tempo gospel song “I’m Ready Now” written by Paul Harrigill. You can tell a banjo player wrote the song because it got some great banjo breaks. If church had songs like this playing more often you’d see a lot more folks in the pews.

The eleventh song is “I Thought You Were Someone I Knew”, written by Kelsi & Paul Harrigill with Jerry Salley. Lead vocals are Charli with Kelsi and Buddy on harmony. This song has a nice county feel that when you hear it will remind you of Lee Ann Womack. I enjoyed this song.

The last song “How Long” was written in 1971 by John Souther. The Eagles released this song back in 2007 but played the song live in concert back in the early to mid 1970’s. This version has that original “Flatt Lonesome sound”. Buddy with lead vocal with Charli and Kelsi on harmony. This song has all the makings of a true country song with references to bluebirds, trains, prison, and hounds. All its missing is momma, and a whiskey still, but I digress.

Over all a very enjoyable album, from some great pickers and singers. Dan Mullins summed it up better than I could in an article in Bluegrass Today.

“Flatt Lonesome is just the sort of band bluegrass needs right now. They’re well-schooled in bluegrass tradition, but their youth leads them to be open to new possibilities. They are making great original bluegrass, and it’s some of the freshest our genre has been offered in a while. Their harmonies are some of the best in the business. Matched with their instrumental prowess, Flatt Lonesome is quickly becoming a bluegrass tour-de-force. Most importantly though, their music comes from the heart. They have found their own voice in the bluegrass community, and it is a voice causing young people to think actual bluegrass is cool again. I don’t know about you, but I think that is a message worth supporting.”

I would be remised if I did not mention that Flatt Lonesome has recently received the IBMA 2014 Emerging Artist of the Year award. And with the music they are cranking out I can see why. This group will be a force to reckon with in the coming years and I look forward to hearing more from them.

(PS: No actual chickens were harmed in the making of this album. Just though you should know. )

Plus....Charli Robertson is real easy on the eyes......and a heck of a fiddle player!

'What does Granada Style Mean?' 2 hrs