As everyone is more than likely busy or traveling this holiday season, instead of putting tab or other banjitar playing info in this month's article I thought it would be great to introduce another banjitar player/performer from the UK I found in my online wanderings. I am pleased to introduce to you… Black Jack Barnet! 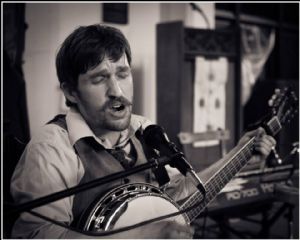 Black Jack's taking up six string banjo was a gift... literally. A performing guitar and ukulele player, his friends decided to give him an Oldfield banjitar for his 30th birthday at an open mic night in Manchester. The rest, as they say, is history.

Always dressed as a gentleman in a suit complete with a tie, and often seen in a bowler hat and ever present moustache, he truly has the presence of a musician from a time now long since gone. Jack prefers “Old Timey” tunes, using simpler arrangements as he loves wordy songs. He plays rhythm and does fingerpicking, preferring a more soulful approach to his songs rather than blazing on the fingerboard.

He also has an affinity for performing in unusual places such as the Manchester Art Gallery or an empty swimming pool. Snobbery is not in his vocabulary. He’s as much at home in Buckingham Palace as the local pub.

Tuning-wise he prefers standard guitar tuning for fear of, as he puts it, ”putting my eye out by accidently popping a string” in trying open tunings. He prefers concentrating on the delivery of the songs he writes and sings though from the photos one can see he does have his moments of rock guitar poses! There is a sense of playfulness about this guy which I fear has been lost in most modern day performers who have gotten stuck in a rut of being “taken seriously."

He has a spot on Reverbnation where you can pick up the CDs he has released (three to date).

And for being so “Old Timey” he has a Facebook page.

I’m hoping you’ll enjoy watching and listening to Jack, and get in touch with him to say howdy from across the pond.
And... last but not least--I’m wanting to wish you all a very happy and safe holiday and a wonderful 2014!

great! keep finding those banjitar players. i have 2. a savannah and a gretsch, both banjitars.

Thank you and I will! Love the comments as it lets me know folks are finding the articles helpful,and that there's banjitar players out there.

I love the videos. My wife bought me one of the new recording king 6 string banjos for Christmas. While I'm not supposed to touch it till then, the few times I have I know there will be a learning curve. I can't pick it like my 5 string, and it doesn't sound right strumming it like my guitar, so any video or advice you post is going to be more valuable to me than you may realize. Thanks and keep posting!

Glenn,feel free to contact me with any questions you may have-I played guitar before banjitar and like you,was totally disoriented with it at first. (which resulted in it sitting in it's case for a looong time) I also teach via Skype,just to let you know.

Thanks. I'll probably drive you up a wall with questions when I can finally 'officially' get my hands on it. Maybe my wife will give in and let me have it early. Thanks again.

Glenn,I look forward to your questions-honestly I do. I had no help at all when I got mine in the 1990's- I had never heard of one much less seen one till then. So I was totally lost.

Hey BanjoBelle, firstly can I say thank you for opening the Banjitar group. I have recently joined and left a few posts on there. Just to let you know that I am more at home on the 6 string banjo, (being a guitarist of many years), than the 5, which is a pity, but I just can't come to terms with it.
Don't know if I am allowed to leave a video of me playing the 6 string, that's if I can figure out how to post a video onto the site.
Look forward to hearing from your good self.
Kind Regards,
Golden_Oldie