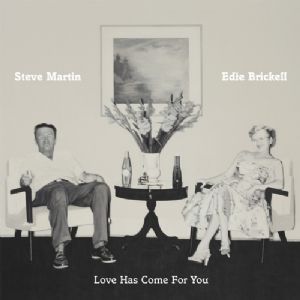 If what you remember of Edie Brickell was her one hit in the late '80s, "What I Am", an infectious number with a plagiarized Jerry Garcia envelope filter drenched melody, you probably lost track of her career, and the fact that she's Mrs. Paul Simon and a skillful lyricist who has maintained the attractive tone of her easy voice.

If what you know of Steve Martin is his role in popular comedies, his wild and crazy arrow through the head routine, you might not be aware of his pre-eminent status as Ambassador of Banjo, and  his many decades performing and recording his solid three-fingered and clawhammer style. Banjo enthusiasts know the central role Martin has played in the banjo world, even if his playing isn't necessarily complex.

As displayed throughout Love Has Come for You, Martin's playing is smooth, without any unnecessary ornamentation. The strength of the album is the marriage between Brickell's lighthearted lilt and Martin's uptempo clawhammer. There's an undeniable sense that Martin and Brickell, as well as the fine roster of studio musicians, are having a good time. Smiles, jokes and laughter seem to fly through many of the performances.

"When You Get to Asheville" is the kind of poignant, clever song that can carry an entire album. Brickell's lyrics sound warm, but there's a current of sadness, which the listener will come to understand by the final verse. What starts out sounding like the casual exchange of messages between friends turns out to be a deeper relationship.

Compositionally, "Fighter" with "King of Boys" may be the most interesting. Minor chords darken the mood in what is otherwise an upbeat album. Haunting cello notes are just at the edge of the mix. The album is sure to be recognized and rewarded for the freshness of its approach and the refinement of its sound. Riding a recent wave of interest in Americana, this album will rank among the best of the year in that genre.

Some of what may not appeal to purists is that this is not a bluegrass album. Despite what less informed critics may assert about Martin and Brickell's "new bluegrass album," there is not a single song that is arranged with traditional instrumentation. In fact, many of the songs are augmented by the electric guitar work of the studio stalwart, Waddy Wachtel. And while it doesn't make any pretense of being a bluegrass album, Love Has Come for You will have to stand on the strength of Brickell's lyrics and singing. In this way the album is more a showcase for her than it is for Martin's playing and songwriting. Brickell's voice is distinctive, but it tends to lack versatility and the songs can begin to sound similar. Combine this with a personal, subjective perspective in many of the songs and the album can sound like a great comeback album for her, rather than a collaboration. This is especially obvious in a song like "Sun's Gonna Shine", which sounds like it could have been written for that comeback album in the early '90s.

In listening to the album I found myself enjoying the intros and moments when I could focus only on Martin's playing and composition. His clawhammered melodies can be haunting and unique, which is no small accomplishment with an instrument that is so persistently tied to tradition and history. His playing in "Who You Gonna Take?" displays an easy proficiency, facilitated by his Irish influenced clawhammer, which is Martin's style of choice for most of the album.

Rounder produced a package to match the excellent production value throughout Love Has Come for You. The enclosed booklet offers all the lyrics, list of musicians for each song, production credits and fine photography for those of us who still consider listening to great music a more comprehensive sensory and tactile experience.  I suspect that the album will receive critical and commercial success because the songs will appeal to a much broader audience than bluegrass and old-time purists. But at least for this purist, I will be paying much closer attention to Martin's songwriting and banjo playing.

I love this CD. The word I always use to describe it is "simple". It reminds me of some of the old folk music of the 60's - 70's where the story telling is as much a part of the tune as the music in the song. I had the chance to see them along with the Steep Canyon Rangers and the music was just as good live.

As an unrepentant folkie, I look forward to this new CD. I love the idea of the banjo bringing its traditional flavor to new places and new things.

I heard the title track a while back and bought the entire recording. I don't know enough about the banjo to comment intelligently on Martin's technique, but, after nearly fifty years of guitar playing, I feel safe in saying that he played tastefully and with obvious love for what he was doing. I was pleasantly surprised.