Posted by twayneking on Tuesday, September 10, 2013 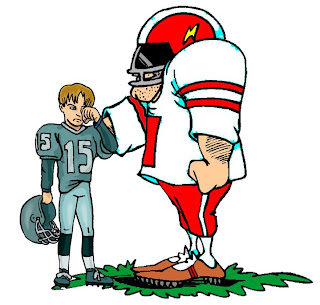 An old schoolmate of mine passed away this past week.  A big (actually very big) good-humored guy, Ernie McQueen was one of my teachers in a way, though he never drew a paycheck from the school.  When Ernie was in 10th grade at Keene Public School I was in 7th.  I weighed about 95 pounds soppin' wet. Ernie weighed rather more.  We all had PE together - grades 7 through 10 - and we played semi-supervised flag football during September through December. Flag football at KPS was something of a contact sport which we played in those white PE uniforms that look like underwear - no pads, no helmets and the teacher often stayed inside to grade papers and left us to our own, often violent, devices.

Following the mysterious reasoning of adolescent males, my quarterbacks decided that, since the skinny kid with the horn-rimmed glasses was useless for anything else, I should become a lineman.  Ernie always seemed to line up across from me whenever we played.  The teams were usually the same guys with a few exceptions. Being last chosen, I would always wind up on pretty much the same team every time - those destined to lose.  I never asked.  I just took up my place as cannon fodder on the line.  During baseball season, it was deep right field where I couldn't do much harm. Ah, well....

Blocking Ernie was a challenge to say the least. He used to go over me like a freight train.  I'd throw myself at him with all I had and Ernie would swat me aside like a pesky fly and go clobber my quarterback.  When I was on defense, I could outmaneuver him so long as he didn't get a clean hit, but it took so long to get round him I seldom was able to get a hand on the quarterback or whoever had the ball. If Ernie did manage to get a solid block on me, however, I would wind up flat on my back in some sticker patch deep in my own backfield watching little birdies circle my addled brain.

Ernie once told me, "King, I admire your stubborness." I'm actually kind of proud of that. Ernie taught me a lot about tenacity that season.

Be the first to comment on “Ernie McQueen - Teacher of Tenacity”