You know you're gettin' old when... 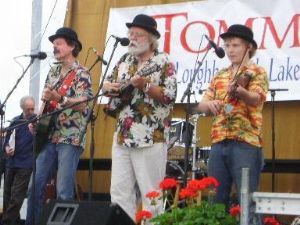 Ted Staunton, Jimmy Bowskill and I recently played a gig at the Greenbank Folk Club as The Maple Leaf Champions Jug Band.  The woman who introduced us said,"This band really bridges the generation gap.  There's a 45 year age span in the group."  Guess which end I'm on.

I also know I'm getting old when people say, "Happy birthday to Jim, who is ___ years young."

Despite this, I don't feel like an old man.  I think music keeps me feelin' young.

Who'd thought that fiddle player was only 5 years old ;-)

Thanks Chris...Don't I wish. I don't feel over the hill yet though.