In the 2001 pilot episode ("Caretaker") for Star Trek: Voyager we learn the show's premise: Voyager is pulled across the galaxy by a mysterious caretaker and must make its way back home.

The caretaker assumes several forms, including that of an elderly banjo player... 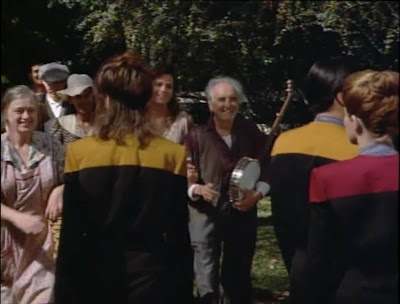 ...who plays a few licks here and there. 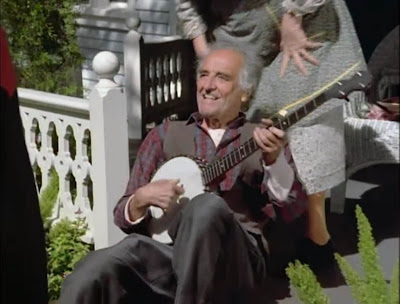 The joke (such as it is) occurs when the crew approaches approaches the banjo man asking as he's sitting on a lawn couch, plucking idly. I think he's playing "Go Home."

If you've got Netflix you can check for yourself around the 35:40 mark in Star Trek: Voyager in Watch Instantly.

Cool! Thanks for the excellent research

It's nice to find something to like about Voyager, musically. I always felt that their theme song was just an overproduced version of "Silence Is Golden" by The Four Seasons.

The earliest recording of 'Silence is Golden' that I've heard was cut by a girl group that called themselves The Choffons.

Sorry, make that "The Chiffons"