I'm looking forward to hanging out with a bunch of BHO in the real world (meatspace, we call it) this Friday night at FQMS in Louisville. We've got about 100 people who have RSVPd, so it'll be a real party!

We'll start at 5PM, with food ready around 6. Burgers and chops for all.

If you want to come but haven't RVPd yet, please do so here.

The event is free, of course, but we're asking folks to register if possible so we can get a head count. 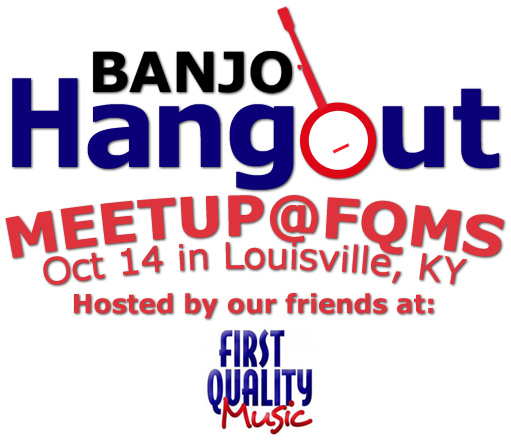 21 comments on “BHO Meetup at First Quality Music in Louisville this Friday night!”

I would love to attend. Maybe one day I will but I live so far away. I can still wish everyone else the very best. I would be a great event, a sure winner.

Eric - This is a great idea. Like the above post - its a bit far for me. Hope you're thinking about sponsoring other meetups - One here in the east would be well attended. Lots of banjo pickers out here. Somewhere between Richmond and Washington DC would probably work real well.

I plan to attend. I changed my day off to be there. Should be fun!!

I'm with n1wr... You could have a get together in the DC area and pull a lot of folks in from Baltimore Washington and Richmond... I bet you'd get a great turn out.

one out west would be good too

If you all are still in town on Saturday, there will be a bluegrass band scramble/bluegrass jam right across the river from Louisville in Clarksville, Indiana. Murrell can give you some information and also check this blurb from the local newspaper:

I want to thank you and the Sullivan boys for putting on a first class event. I had a great time and sure did enjoy the good people that I got to meet and hangout with. Man those Vintage 35's are a first class banjo and that Mirtle was a pleasure to have in my hands. Thanks again and I hope this becomes and annual event.

WOW Such a great event. Thanks to Eric Schlange and the Sullivan family and employees for making everyone feel welcome. Such a great bunch of pickers and nice people. I have never had the opportunity to pick so many different banjos. I thoroughly enjoyed myself tonight! I second making this an annual event if possible. Jeff Parker

Thank you Eric and thank you Sullivans. What a wonderful evening. It was a pleasure getting to know you all and to meet many of the hangout members. Being in the midst of all those banjos made me feel like a kid in a candy story. It was also good to see how committed First Quality is committed to building a great banjo. I also have to say, the pork chops were GREAT!
I too hope this can become an annual event.
Thanks again,
Ken

Great event. Even though I had to leave early for one of the boys baseball games, I enjoyed it very much. Good food, good people, and amazing music

Also if anyone can share pictures from this event I would love to see them. Thanks, Jeff

I also had a-- gooood! -- time. I enjoyed putting finger prints on Eric's new banjo. What a beaut! Thanks Eric and Sullivans and great bunch of pickers I got to meet. Dwight

This was truly an event. Thanks to Eric and Jeff and their staff. If you were there, you had a good time. There was talk of this being an annual event. If it is and you didn't attend this year, don't make the same mistake next year.

Jeff, just got in from the get together in clarksville In
Hope to sort thru the pics in the morning and post a few good ones
Sure had a great time!!!

Started a thread for posting photos and videos of the meetup. Here it is! banjohangout.org/topic/218174

I enjoyed it as well. It was First Class at First Quality. There isn't a better group of guys than the Sullivans. I ordered parts to build one friday night and Eric was more that helpful and implied he would continue to be. Thanks to all that was there

Nice work Eric - hope you can do this in other spots in the future. Arizona is just a little too far for this one. Enjoy.