Here's an analysis of the tempos of four banjo practice DVDs.

Why would I create such a thing? The other week I criticized The Ultimate Beginner Series by Alfred Music for having a play-along-with-the-band section that was "waaaaay too fast for a beginner to keep up with."

I'd wondered since if I'd been too harsh. So I pulled out my handy-dandy Korg MA-30 Metronome and used its tap function to find the tempo of the songs from that DVD.

Of course I needed to do the same with some other DVDs to compare. And I had to put them into a spreadsheet.

I color-coded each song, arbitrarily selecting these ranges: 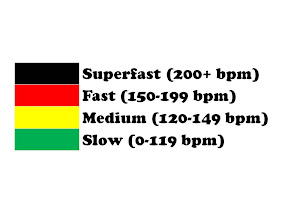 (I treated most of these songs as being in 4/4 time so you might need to divide these tempos by two if you want to think in 2/4 terms.)

Then one thing led to another and soon I had... 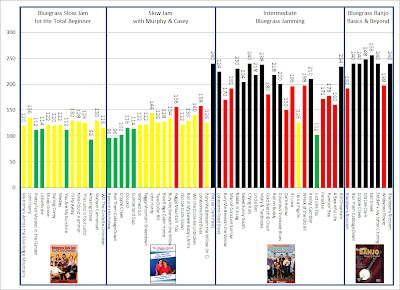 ...a chart of the songs and their tempos, in beats per minute. (Click on the chart for a better view.)

Let's run through the four DVDs that I compared, shall we? I've put together some slides to show how many slow, medium, fast and superfast songs are on each DVD. 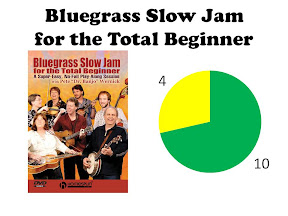 Bluegrass Slow Jam for the Total Beginner is the beginner-friendliest of my four practice DVDs, tempo-wise. Most of its 14 songs are played at a nice, slow tempo and the rest at a medium.

Each song has its own DVD chapter but it's a little awkward to practice with since the play-along chapters are mixed with chapters of advice and instruction. I wish the DVDs creators had tacked on a DVD menu that would allow you to play song after song after song as you practice, which is how I like to do it. 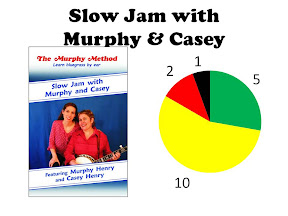 I just purchased Slow Jam With Murphy and Casey a couple of weeks ago but its quickly become my favorite play-along DVD. It's got more songs than the other DVDs and the key changes are few and far between. The DVD is dedicated to play-along sessions so there's very little of the advice and instruction that interrupts some other DVDs.

(Incidentally, they threw in that one superfast song just so you'd hear what one sounds like.) 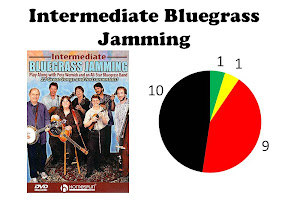 I practice with this DVD occasionally. I'll admit that its higher speeds have scared me off, but this project has made me rethink that a little. I think I'll start using it more often. Besides, as the DVD's host Pete Wernick has pointed out, the tempos of these songs are pretty representative of what you'll encounter at a jam. 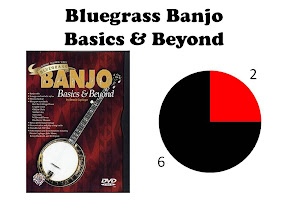 The fastest of my four practice DVDs, Bluegrass Banjo Basics And Beyond is part of The Ultimate Beginner Series. This DVD (and accompanying book) is also available in a mandolin or guitar.

You can read my critique of this series here. But, basically, the play-along sections of this DVD really are waaaaay too fast for beginners.

I'm glad you found this information useful. I figured that somebody would.

You can use to slow down the songs from audio CDs. I use Audacity and I've heard good things about Band In A Box. But I haven't found a good way to do that with DVDs, so you're pretty much stuck with the tempos that are provided.