Banjo versus TV week 116: The question of the mandolin-banjo 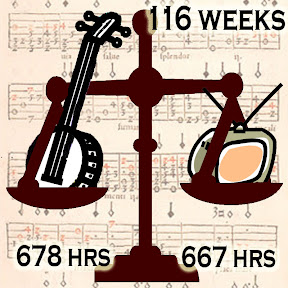 The Banjo versus TV project faces an existential question.

But those rules didn't anticipate this question: What do I do about the time I spend on the Gold Tone Mandobanjo 850 that I just bought (for $267.77, cheap!) on eBay?

The banjolin is really just a Irish tenor banjo...

...with a shorter scale length. The banjolin is tuned to g d' a' e'', one octave higher than the Irish tenor banjo's tuning of G d a e'.

So the banjolin is a shorter Irish tenor banjo and the mandolin-banjo is an eight-stringed banjolin. 
2 comments on “Banjo versus TV week 116: The question of the mandolin-banjo”

LOL :) I have an old Belltone banjomandolin from the 1930s that is in good shape and I have it under my bed--so pull it out and play fiddle and celtic tunes in the morning. It is great fun--but definitely is more of a mandolin even if it looks like a banjo. :)
Best wishes,
Mary Z. Cox
maryzcox.com

I have owned several Fairbanks-Vega mandolin banjos, Style K and Style S models. I suppose the Gold Tone offering, despite it's rather small head diameter, can qualify. Who is to say a 8-1/2" head or even a 12" head cannot qualify? There are definitely more parts involved with the rim portion of the instrument versus the neck part, leading most folks to believe the instrument is a banjo, however, it is played with a pick like a mandolin. Of course, some types of banjo are played with a flatpick, too, so I would give the edge to it's being a "banjo".