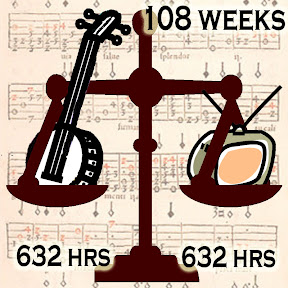 I've been listening to my recordings of the Midwest Banjo Camp sessions. When I do, I almost always catch something important that I missed the first time.

This week's find is Alan Munde's 2009 session, "Intro to Creating Bluegrass Solos". This session is a gentle introduction to the "Roll Logic" section of Munde's book, Getting Into Bluegrass Banjo.

Basically, Alan has his students find the melody on the second string and choose rolls that hit the right note at the right time. It's a simple and pretty way of putting together a break.

In his book, he expands on this idea by adding in the third and sometimes fourth strings and by adding in some up-the-neck chord forms.

I'm going to play around with this technique. I'm pretty good at finding a melody and I find this technique to be really attractice.

Other things I learned reviewing my recordings of Midwest Banjo Camp sessions:

Interesting blog JR! How much more productive we would be if we watched less TV. I spend WAY more time practicing than watching TV. (But I have to break for American Idol - got to watch that) ;^)