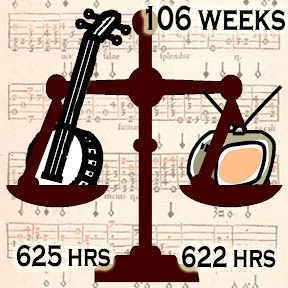 I've been playing the banjo for nearly three years now and I still couldn't finger the first major chord position well if my life depended on it.

Okay, enough with the aside. Back to how bad I am at doing it.

I can sorta/kinda finger this form slowly. But what I can't do is to pop right into it the way I can pop quickly between the first position C and first position D7.

How am I going to teach my fingers to switch quickly into this chord position?

For starters I'm going to find recordings for a bunch of 2-chord songs. Pete Wernick's got a good list.

Then I'm going to practice by playing these songs in a loop doing a basic strum (or boom-chick) as I switch in and out of chords that use the first major chord position.

For example John Henry is a 2-chord song that Steve Martin plays slowly in the key of G (on The Steve Martin Brothers CD). I'll play along with this song, switching between these chords...

...over and over until I burn the chord position into my brain.


Be the first to comment on “Banjo versus TV week 106: Finally learning that F-ing chord position”