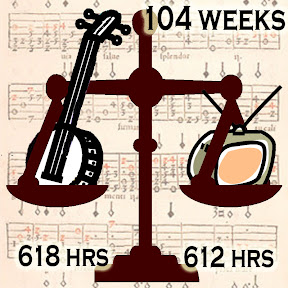 Midwest Banjo Camp (which will be held in Olivet, Michigan on June 4-6, 2010) has released MBC's Official List of Jamming Tunes for a type of jam session that's new this year: the play from a list jam.

In this type of jam the leaders promise to stick to a published list of songs. They've released official lists for bluegrass and old-time players.

I think it will be an interesting to see how this type of jam compares with the other kinds of jam that the camp offers: slow jams for novices, "how to jam" workshops, intermediate jams, open james, specialty jams (e.g. bluegrass vocals, old-time vocals, jazz and swing, and northern & Celtic) and experts' jams.

I'm likely to go to the bluegrass jam, so I took a look at the songs to see where I stand. Here's my take on the 25 songs in their bluegrass list and how well I could play them.

I could play these well and could improvise a little

I could do backup and could definitely fake a solo

Couldn't really do it

So I've been practicing some of the songs that needed work, especially Worried Man Blues, Long Journey Home, I Saw the Light and Mama Don't 'Low.


Be the first to comment on “Banjo versus TV week 104: Midwest Banjo Camp's Official List of Jamming Tunes”

'Advice for an absolute beginner in Adelaide, Australia' 11 hrs