Posted by jrjenks on Wednesday, December 9, 2009 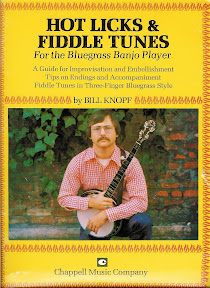 Today I'll cover Chapter 4 but it's worth noting that Knopf says many of the licks from Chapter 1 can serve as the endings of songs as well.

Knopf's ending licks are a two-part pair of licks that are appended to a song. You play through the song, usually returning to the tonic (that is, the chord that the song is written in), then you play a two-measure preparatory lick and a two-measure ending lick.

For example, if you're finishing a song that's written in the key of G you can play the last verse of the song then add this preparatory lick...


Be the first to comment on “Endings month: Bill Knopf's two-part endings”

'TIFU: Cut all strings Off my banjo' 1 hr

'The Unquiet Grave. A clawhammer banjo tune, and a rock climb.' 2 hrs