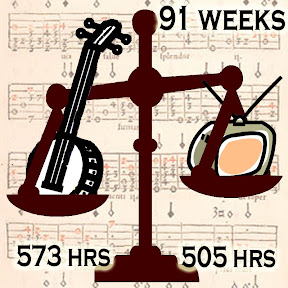 I visited my British grandmother this past week. I've blogged about her before, how she was a motorcycle courier during the London Blitz.

We talked about her old favorite pub songs from her days in London. Songs like Knees Up Mother Brown, which starts about 50 seconds into this video:

That's a great old pub song. (And only a truly twisted mind would think it would make a good kid's ditty.)

Another of her favorite pub songs is My Old Man's a Dustman, seen here with a tea chest bass (the skiffle band equivalent of a jug band's washtub bass):

Another notable thing about that My Old Man's a Dustman video is the use of a banjolele, which is what Granma thinks of when she thinks of banjos. Basically, she thinks that banjo players should sound like George Formby:

So now I've taken it as a challenge to learn how to play some pub songs for Granma on my banjo.

I've ordered up a copy of Let's Have Another One: 22 Classic Pub Songs to get started.


Be the first to comment on “Banjo versus TV week 91: Granma's pub songs”

'Steve Martin / Graham Sharp - What banjos are they playing?' 4 hrs