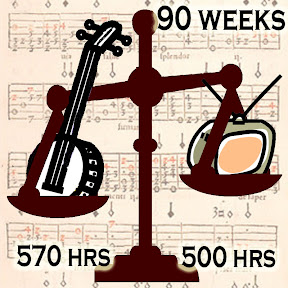 ...but I had a pretty musical week while attending G2E at the Las Vegas Convention Center.

When planning my trip I'd searched the web for a jam and found Mrs. Hyatt's Legendary Old-Time and Bluegrass Jam, Tuesday nights at the Lorna J. Kesterson Valley View Recreation Center in Henderson NV. It was about an hour away from the Las Vegas strip by bus. (I got a lot of use out of my three-day bus and monorail passes.)

The jamming was wonderful. There were about 20 people in a traditional song circle playing guitars (~9), fiddles (2), banjos (~5), mandolin, spoons, harmonica and Dobro for two hours.

If you're ever in the neighborhood of Henderson, NV on a Tuesday night, look this group up!

Other places I played my banjo:


Be the first to comment on “Banjo versus TV week 90: Las Vegas”

'Vega headstock but what model?' 2 hrs