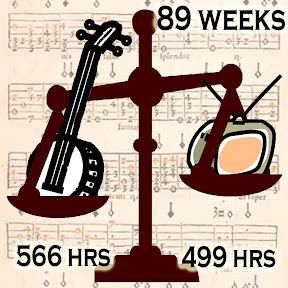 The big event of this last week was, of course, Chicago's Second Annual Battle of the Jug Bands at Morseland, organized by Arlo Leach and featuring...

Additional entertainment was provided by our opening act, The Northside Southpaws, who played...

...and by Hotfoot Annie, who tapped her way through......as the votes were counted.

I was pleased with my performance. I held my own in Bay Rum Blues (my first VI-II-V-I song) and I bluesed it through both chords of Feelin' Good (the stage debut of my recently-developed string bending talents).

I also kazooed up a solo for Sun Brimmer's Blues and gutbucketed along with I Can't Dance.

There are gobs of photos at my Flickr set.


Be the first to comment on “Banjo versus TV week 89: Chicago's Second Annual Battle of the Jug Bands”