Banjo versus TV week 74: Brass note for Will Shade and the Memphis Jug Band 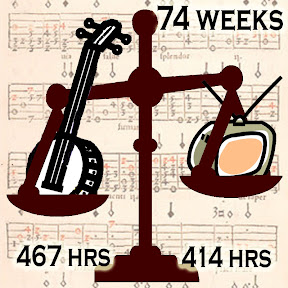 I took a trip to Memphis for the dedication of a brass note to Will Shade and the Memphis Jug Band, organized by Arlo Leach. Arlo taught the jug band class I took earlier this year at the Old Town School of Folk Music. As part of Arlo's tribute to Will Shade, he invited any available jug banders to come down to Memphis and play at the ceremony. So we did. Will and the band's brass note is on Beale Street, right across the street from the notes for Memphis Millie and Elvis. Arlo dubbed us the Brass Note Jug Band and we played for a couple of hours. Our set list [with timing for the two WAV files we recorded]:

(At least I think that's pretty much it. Corrections are welcome.)

I played along on my sawed-off banjo as best I could, which was better than I thought. That 12 bar blues stuff makes backup playing pretty easy. I didn't do any banjo solos, but I'm getting there.

I did make up and sing a verse to Back to Memphis that worked out pretty well:

Big praise to Arlo for organizing such a great event.


2 comments on “Banjo versus TV week 74: Brass note for Will Shade and the Memphis Jug Band”

Thanks so much for posting this. I am a big fan of jug band music, and especially of Memphis Jug Band. Glad to see them get their due.

Say, that was a fine tuxedo you wore, JR.  Did you wear an ice vest under it to keep cool?  I see that the rest of the jug banders weren't dressed as formally as you were.  By contrast, I wore a Hawaiian shirt with ukeleles on it last Sunday at the Costellos jam.