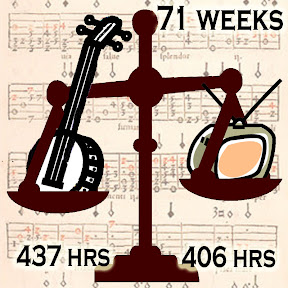 My banjo instructor, Dave, was the featured performer at the Old Town School's First Friday this month. It was good to see his performance, in part because it gave me a chance to see him practicing the things he's been preaching.

When Dave played with his partner Marian (of David & Marian), for example, I saw something that Dave had told me about back in week 47. Check this out: This is a trick that Dave often uses when he's playing the same instrument as another musician: two instruments, one capo. Both musicians are playing in the same key, but the fact that only one of them has a capo forces them to use different fingerings from one another. This means that the instruments sound complimentary, not duplicate-ey.


1 comment on “Banjo versus TV week 71: Two instruments, one capo”

I never thought about it before. Thanks for the tip JR