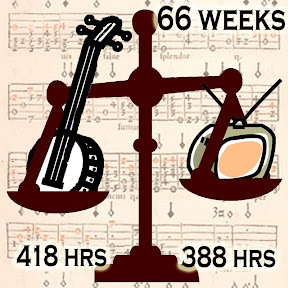 Like I'd said, I went to Midwest Banjo Camp this week. And I loved it!

I went for the whole thing, so I got a chance to do things from both the regular schedule and the pre-camp schedule. If you go next year I highly recommend the pre-camp. It gave me a good chance to interact with the instructors and to get into the mood of the thing.

I recorded the audio of a lot of educational sessions and plan to review them throughout the year on my blog. These sessions include:

But aside from the sessions and the jamming (which I was able to participate in much better this year, thank you), the big draw of Midwest Banjo Camp is the faculty concert. Each faculty member performs two pieces, which might not sound like a lot until you consider the size of the faculty. The concert takes up two hours each night for two nights and is so good it's worth the price of admission itself.

Unlike previous years where they'd tried to prevent people from recording the concert, this year they bowed to 21st century reality and allowed us to record. For my own benefit I took careful notes about who performed what. Here's my list, which might be useful to others who recorded:

And of course, there's the camp photo. If you look very closely you can see me and my sawed-off banjo in the second row, about one-third of the way from the left. 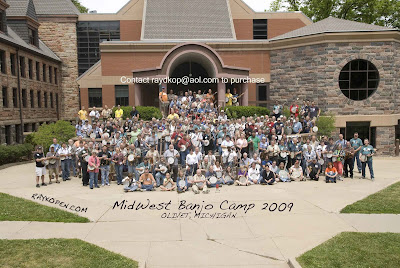 
Be the first to comment on “Banjo versus TV week 66: Midwest Banjo Camp”