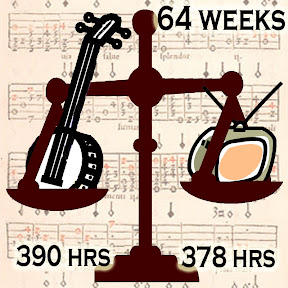 Y'know, for a blogger who runs something called the Banjo versus TV project, I spend way more time blogging about banjo than I do about TV. So since this is the week that the networks announce their new lineups, what say I blog about TV for a change?

ABC is bringing back V? From the '80s? Tubular!

So long, Terminator: The Sarah Connor Chronicles. Giving up on you was one of the first things I did in the Banjo versus TV project.

The redhead and I really enjoyed the pilot for Glee. It was kind of odd seeing a May pilot for a TV show that won't air until the fall. If you're a show biz geek (and you should be!) and you missed it, check it out some time this summer at http://www.hulu.com/glee

Curses upon NBC for cancelling My Name Is Earl. I hope the rumors about another network picking it up are true.

Shows that have been piling up, unwatched, on my DVR: The Office, The Girls Next Door, Survivor and The Amazing Race.

I've been thinking about watching Fringe, so I hope it does well in its new timeslot. It looks like some good sci-fi.

Bummer about the cancellation of Samantha Who? I swear I was going to start watching that regularly.

The show I'm most excited about is So You Think You Can Dance, so I'm really happy to get both a summer and a fall season of it.

You mention the redhead, but there you have no corroborating pictures.  Inquiring minds want to know if her coiffure is as full-bodied and voluminous as yours.  Maybe you can get her to pose with a banjo.  You could become the envy of the unattached guys here at BHO.

Can she sing?  If so, bring her with you to the Costello Jam.

'Vega headstock but what model?' 7 hrs