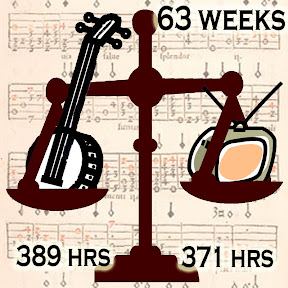 Remember how in week 61 I'd ordered two portable power speaker sets? Of course you remember. I only posted it about an hour and a half ago, because it's Memorial Day weekend and I'm catching up.

So never mind that question. The point is, I've compared the two and decided that I prefer the Panasonic RPSPT70 Folding Travel Speakers to the Sentry Clamshell Folding Amplified Speakers. The RPSPT70 sounds much better. Also, if your batteries are dead or the unit is switched off the RPSPT70 can still be used as a non-amplified speaker set. The Sentry model only works when it's got power.

The Sentry isn't without its advantages. Its smaller size and its rounded design is a better fit for a gig bag. And its power switch is kept inside when folded. That's important because the RPSPT70's outside-facing switch tends to get accidentally flipped when I travel. But still, good sound is good sound so I like the RPSPT70.


Be the first to comment on “Banjo versus TV: Week 63”